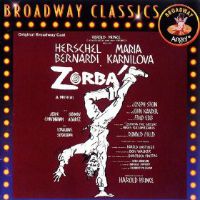 (5 / 5) Are you sitting down? When I saw Zorba in its original Broadway production (not the horrible Anthony Quinn revival; see below), I thought it a better show than Cabaret, the previous Broadway outing of the team that put this show together: composer John Kander, lyricist Fred Ebb, and director Harold Prince. To me, Zorba is more emotional, deals with life more broadly, and is brilliantly theatrical. Whereas many Kander and Ebb musicals are made up of a succession of special-material songs, this one has an honest, mature, character- and plot-driven score. The opening number, “Life Is,” perfectly sets the theme of the evening. (The first line, “Life is what you do while you’re waiting to die,” was watered down to “Life is what you do till the moment you die” for later productions.) “Happy Birthday” is a wonderfully touching number for the death scene of Madame Hortense, while “Why Can’t I Speak” is a very beautiful song that exemplifies the protagonist Niko’s emotional problems. Although some of the events in Joseph Stein’s libretto are tragic, the audience leaves the theater moved, enlightened, even uplifted — and the cast album has the same effect on the listener. Herschel Bernardi, Maria Karnilova, John Cunningham, Carmen Alvarez, and Lorraine Serabian drive the recording with their sincerity, energy, and abundant talent.  — Ken Bloom 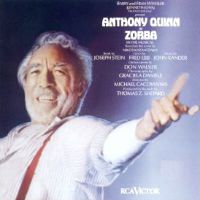 (2 / 5) Anthony Quinn and Lila Kedrova, who so memorably played the title character and Mme. Hortense in the 1964 non-musical film Zorba the Greek, starred in this revival of the Kander-Ebb-Stein musical Zorba under the direction of  Michael Cacoyannis, who had directed the film. Unfortunately, Quinn sings so poorly here that many listeners will find this recording unlistenable. The other performers, including Robert Westenberg as Niko and Debbie Shapiro (later Debbie Shapiro Gravitte, later Debbie Gravitte) as The Woman (previously known as the Leader), fare much better, but the original Broadway cast recording is the one to get. — K.B.