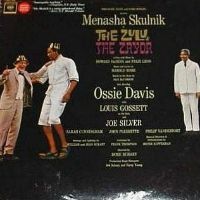 (1 / 5) This was an odd little show, billed as “a play with music.” Columbia probably decided to record The Zulu and the Zayda because the songs were written by composer-lyricist Harold Rome. The fact that the cast included Menasha Skulnik, a Yiddish theater star in one of his final performances, plus Ossie Davis and Louis Gossett, perhaps enhanced the label’s interest. The score combines South African folk-style music and Yiddish theater-style songs. Particularly catchy is the first-act closer: Skulnik gives his new-found African friends a lesson in Yiddish, teaching them the meaning of “Oisgetzaichnet” (translation: “Out of this world!”) after they have sung “Like the Breeze Blows,” an uplifting song of freedom. Skulnik’s duet with Gossett, “It’s Good to Be Alive,” is charming, as is his solo “River of Tears.” Most of the songs are attractive, but this is not a full-scale musical. The recording is for cast album completists, alphabetically the last in their collections. — Jeffrey Dunn