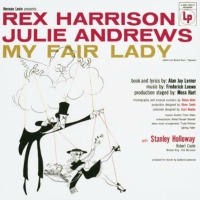 (5 / 5) My Fair Lady is still regarded by many as the supreme achievement of the American musical theater, and the original performances of Rex Harrison as Henry Higgins, Julie Andrews as Eliza Doolittle, Stanley Holloway as Alfred P. Doolittle, and Robert Coote as Colonel Pickering are considered definitive. Overall, lyricist-librettist Alan Jay Lerner and composer Frederick Loewe did such a masterful job in adapting George Bernard Shaw’s Pygmalion to the musical stage that critics have been happy to forgive the several grammatical errors in Lerner’s lyrics, as well as his use of some words and expressions that are not employed in British English. The show was the biggest hit of its era, and you can hear the excitement of everyone involved on the cast album, recorded in the flush of great success. Harrison has the time of his life as Higgins; his obvious enjoyment of the role makes an overbearing character tremendously entertaining. The young Andrews is a dream Eliza, equally effective as the squawking guttersnipe and the grand lady with pear-shaped tones. Her best moments on the album are “I Could Have Danced All Night” and “Show Me,” but she’s loverly throughout. Holloway, in the role of Eliza’s father, is a charming rogue as he leads the ensemble in “With a Little Bit of Luck” and “Get Me to the Church on Time.” Coote is wonderfully droll as Pickering, and John Michael King does a fine job with Freddy Eynsford-Hill’s “On the Street Where You Live.” Franz Allers conducts the score with great skill and energy.  (The peerless orchestrations are by Robert Russell Bennett and Philip J. Lang.) As performed and recorded here, “The Rain in Spain” is an electrifying moment of joyful triumph, and if the first few measures of the overture don’t start your pulse racing, you’ve probably already shuffled off this mortal coil. — Michael Portantiere 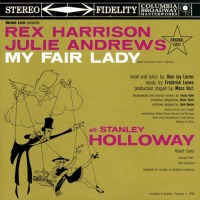 (2 / 5) The peerless original Broadway cast album of My Fair Lady was recorded just a few months before stereo was established as the industry norm. Since the four leads of the Broadway production repeated their roles in London, the powers that were at Columbia Records decided that a new cast album in true stereo would be highly marketable. Alas, the London recording turned out to be something of a dud. Harrison over-inflects much of the role, as if he were bored with it. Andrews sounds rather tired and droopy — although, on the plus side, her Cockney accent seems more organic than on the prior album, which helps make for a more satisfying performance of “Wouldn’t It be Loverly?” This time out, both Andrews and Holloway indulge in talk-singing rather too often. Coote rushes “You Did It,” which is surprising, since conductor Cyril Ornadel’s conducting of this and some of the other numbers is brisk to begin with. In Freddy’s “On the Street Where You Live,” Leonard Weir sounds a little under-powered on the lower notes, even though the key of the song has been raised; but his voice really blooms on the high notes,  and his accent is more authentically British than his Broadway predecessor. Ironically, the sound quality of this recording is inferior to that of the original. Yes, the London album is stereophonic, but there’s significant distortion in certain tracks (most severely in the overture), and the general timbre of the sound is less warm than the monophonic original. — M.P. 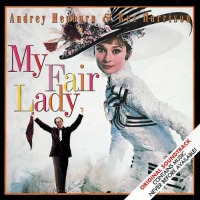 (3 / 5) This recording boasts fabulous orchestrations by Alexander Courage, Robert Franklyn, and Al Woodbury, created under the supervision of conductor André Previn. The orchestrations are lush without ever seeming gimmicky or overblown. Rex Harrison’s Henry Higgins actually sounds fresher here than on the London cast recording; it would seem that a break from the role benefited his performance. As for Eliza Doolittle, the initial plan was to try to use Audrey Hepburn’s singing voice for much of the role, so she recorded several of the songs transposed to the keys in which she was most comfortable. But even after it was decided that “Ghostess with the Mostest” Marni Nixon would dub almost all of Hepburn’s singing (except for the first and last sections of “Just You Wait” and two lines at the beginning of “I Could Have Danced All Night”), the Hepburn keys were retained. As a result, Nixon’s performance was compromised, and Eliza’s songs come across only moderately well on this recording. But Stanley Holloway, back again as Alfie Doolittle, is delightful as ever; Wilfrid Hyde-White is an ingratiating Pickering; and vocal ghost Bill Shirley ardently sings “On the Street Where You Live” on behalf of actor Jeremy Brett’s Freddy, even if their voices seem quite a poor match when you’re watching the film. The CD is a much-expanded version of the original LP. Extras include a lovely orchestral version of “Wouldn’t It Be Loverly?” for the flower market scene preceding “With a Little Bit of Luck,” the servants’ chorus lead-in to “The Rain in Spain,” intermission and exit music, and best of all, the gorgeous “Embassy Waltz” in a wonderful recording not from the film soundtrack. — M.P. 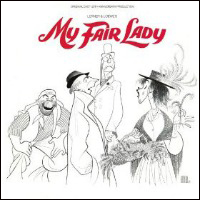 (4 / 5) The CD edition of this cast album of the 20th anniversary Broadway revival of My Fair Lady was belated but very welcome, as the recording is  arguably second only to the original cast album in general excellence. Ian Richardson is a mercurial Higgins, Christine Andreas is superb as Eliza, and George Rose has a rousing time as Alfie P. Doolittle. (He won a Tony Award for his performance.) It’s great to have the wonderfully funny and authentic Robert Coote back as Colonel Pickering, and Jerry Lanning is the most vocally resplendent Freddy on record. When he sings “On the Street Where You Live,” you expect Eliza to throw herself right into his arms. The sound quality of the recording is somewhat dry, but sharp and clear. — M.P. 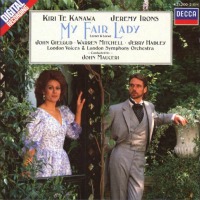 (2 / 5) As Eliza Doolittle, the Maori operatic soprano Kiri Te Kanawa affects a convincing Cockney accent, and her voice sounds beautiful in the higher reaches of the score. Still, there’s a studied quality to her performance. The salient point to make in regard to Jeremy Irons’ portrayal of Higgins is that this role should not be played by someone with a notably sibilant “s”; although Irons is assuredly a great actor, he’s miscast as a professor who’s a stickler for perfect pronunciation of English. Sir John Gielgud sounds ancient as Pickering, but the opera tenor Jerry Hadley has just the right voice for “On the Street Where You Live,” and Warren Mitchell is a colorful Alfie Doolittle. The London Symphony Orchestra is ably led by John Mauceri. — M.P. 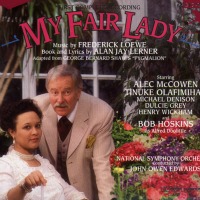 (3 / 5) This note-complete aural document of the score is essential if only for archival purposes. In the case of My Fair Lady, completeness is particularly important for the dance music, largely omitted on other recordings of the score but included here. Other pluses: Alec McCowan is a delightful Higgins, and Tinuke Olafimihan is an excellent Eliza, fully credible in the Cockney numbers and singing “I Could Have Danced All Night” gloriously. As Freddy, Henry Wickham performs “On the Street Where You Live” with sincerity, although his voice is rather shaky. Michael Denison is serviceable as Pickering, even if he makes little attempt to match pitches in “You Did It.” But Bob Hoskins, a fine actor, simply doesn’t have enough voice for Alfred P. Doolittle’s songs; he sounds very raspy throughout, and is almost inaudible when trying  to reach the low notes. The National Symphony Orchestra, recorded in state-of-the-art sound, plays beautifully under John Owens Edwards. — M.P. 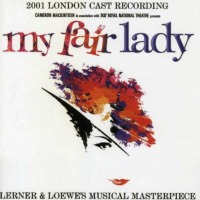 London Cast, 2001 (First Night) No stars; not recommended. As soon as you hear this cast album begin without the pulse-quickening music that began every previous production and recording of My Fair Lady, you’ll sense that you’re in for a deeply disappointing experience. Aside from fussy rearrangements/re-orchestrations by the normally reliable William David Brohn, the performance suffers from some very weak casting. As Eliza, Martine McCutcheon displays an exceedingly thin voice, and Mark Umbers’ rendition of Freddy’s “On the Street Where You Live” is full of superficial, heavy-handed effects but lacks real emotion. On the credit side, Jonathan Pryce offers an intelligent characterization of Henry Higgins, deftly walking the line between singing and speaking, and his imitation of Zoltan Karpathy’s Hungarian accent in “You Did It” is genuinely funny. As Pickering, Nicholas Le Prevost is also fine, and his byplay with Pryce is delightful. But it’s difficult to enjoy these worthy performances, given the setting. This recording is sadly indicative of the destructive influence that producer Cameron Mackintosh has had on musical theater, both in terms of his productions of poorly written new shows and his ill-conceived revivals of classics. — M.P. 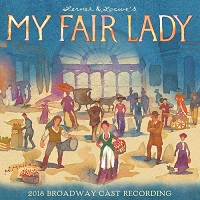 (4 / 5) Here’s the most satisfying — or, to put it another way, the least problematic — cast recording of My Fair Lady in many years. Lauren Ambrose made a largely well-received musical theater debut as Eliza in this Lincoln Center Theater production, her performance marred only by some odd physical mannerisms when singing and a tendency to lag behind the beat throughout her songs, presumably due to a lack of experience. That first flaw is obviously not an issue on the album, and the second problem seems to have been addressed during the recording sessions, so Ambrose’s performance here is quite enjoyable overall. Harry Hadden-Paton brings a refreshingly youthful energy to the role of Higgins; he sings the notes written in the score, rather than declaiming the lyrics, far more often than any recorded Higgins before him, with the possible exception of Alec McCowan. This is not necessarily the wisest decision, because some of the actual melody lines for Higgins’ songs are rather simplistic, but it does help Hadden-Paton to make his performance his own. Norbert Leo Butz has a fine time with Alfie Doolittle’s numbers, Jordan Donica as Freddy Eynsford-Hill sings “On the Street Where You Live” beautifully, and Allan Corduner as Pickering is charming in what little he has to do on the recording. A 29-piece orchestra plays sumptuously under Ted Sperling, and happily, there has been no pointless futzing around with the brilliant, original overture, as Sperling had previously done with the overture of The King and I for the LCT production and recording of that classic. — M.P.