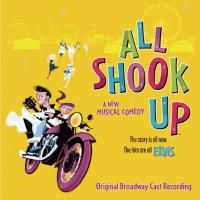 (2 / 5) A lightweight jukebox musical showcasing 25 songs made famous by Elvis Presley, All Shook Up concerns a motorcycle-riding roustabout who brings romance and rock ‘n’ roll to a dreary Midwestern town in 1955.  Flimsily scaffolded by Joe DiPietro’s contrived book, the show contains no original music, thus the value of its cast album lies solely in the degree to which the familiar songs are rendered in new or especially pleasing fashions.  Only about a third of the tracks succeed in that respect. The up-tempos fare better than the ballads, most of which are too fast, encumbered by multi-part choral embellishments, and/or robbed of their emotional warmth by strident wailing.  The performers don’t try to imitate Elvis, but one almost wishes they could, as it was the velvety beauty of his voice that made Elvis’s renditions of songs like “Love Me Tender” and “Can’t Help Falling in Love” such memorable hits.  While none of the cast has a gorgeous enough voice to make those simple melodies as riveting as The King did, Jenn Gambatese (as the roustabout’s love interest, temporarily cross-dressed as a man) gives an impressive interpretation of “A Little Less Conversation,” her bright belt nipping crisply at the rapid-fire lyrics.  With arrangements and musical supervision by Stephen Oremus, the album garnishes solo vocals with harmonizing back-up singers and propulsive instrumental breaks, most satisfyingly in “C’mon Everybody,” a “Teddy Bear/Hound Dog” medley, the country-styled “That’s All Right,” and a Motown-flavored “Let Yourself Go.”  But the recording’s only true standout numbers are “Jailhouse Rock” and “Burning Love,” classics so intrinsically exciting that they never fail to electrify. — Lisa Jo Sagolla