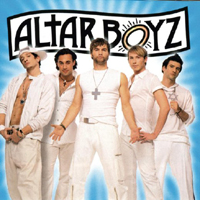 (4 / 5) A boisterous, satirical show in the form of a concert by a Christian pop-rock boy band espousing wholesome morality through their music, Altar Boyz speaks to adolescent worries about being different while pointing out the hypocrisy of those who use religion to discriminate. Via Kevin Del Aguila’s brainy, laugh-a-minute book and clever songs by Gary Adler and Michael Patrick Walker, criticisms are not aimed at specific targets, but are subtly suggested through wise questions and stories containing humorous symbolism. In one of the show’s funniest sequences, the “sensitive” boy in the band tells of getting beat up by “Episcopalian thugs” because he is…“Catholic,” then sings a prideful anthem proclaiming his “epiphany.” The others — a tough homeboy, a Latino, a Jew, and a super-cute jock — also get solo turns that side-splittingly spotlight push-button issues through diverse musical styles. At various points in the score, Jesus’s accomplishments are related rap-style, eternal life is explained to a salsa beat, a gospel sound is used to illuminate one boy’s story of being “called” by Jesus on his cell phone, and a hard-driving funk number insists “you gotta’ work on your soul.” Although the songs sound like pop-rock, they are well crafted as musical theater songs, illuminating characters and creating moods. The lyrics are of the witty, informative theatrical variety, not the numbing, repetitive rock ilk; sung with impeccable diction, they’re easy to discern over the energizing, rock-band instrumentation. This  cast album represents skillful songwriting in support of the thematic content of a smart show. – Lisa Jo Sagolla