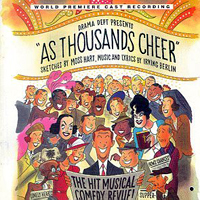 (4 / 5) At a time when large-scale revues were part of the standard traffic on Broadway, Irving Berlin’s As Thousands Cheer was a Bentley. It had great stars, terrific songs, and clever sketches, all with a specific focus: The show was a Sunday newspaper come to life, its varied components commenting on or illustrating topical stories, Hollywood gossip, comic strips, and even the weather report (“Heat Wave”). If anyone wonders about that “rotogravure” line in “Easter Parade,” this show provides an explanation. Original cast members Clifton Webb and Ethel Waters left recorded souvenirs of the show, and nothing will ever top Waters’ performances of “Harlem on My Mind” and “Heat Wave.” (She did not record the devastating “Supper Time” until years later.) The show itself remained an irretrievable legend until 1998, when a “revival” was produced Off-Broadway by the scrappy and inventive Drama Dept. Wisely, there was no attempt to reproduce the show as it was originally, or to have modern performers pretend to be Marilyn Miller or Ethel Waters. Instead, the production put Berlin’s songs and some of the show’s original sketches into one zippy act performed by a talented cast of six who constantly shifted roles. The accompaniment was piano and bass. The charm of that production is communicated by this “World Premiere Cast Recording,” as it is labeled, which reverts to the original order of the songs and generously reinstates “Easter Parade” (not heard in the actual revival). Howard McGillin, Judy Kuhn, B.D. Wong, Mary Beth Peil, Kevin Chamberlin, and Paula Newsome sing and cavort with skill and enthusiasm — and if Newsome’s “Supper Time” can’t touch the Waters version, neither can anyone else’s. There’s even an unknown Berlin gem here: “Through a Keyhole,” a moody evocation of a Walter Winchell-esque gossip reporter. The show may sound more like “As Dozens Cheer” in this version, but at least the cheers are heartfelt. — Richard Barrios