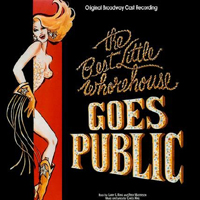 (3 / 5) Those looking for a guilty treat can seek out this cast album of a show that ran for only 15 performances on Broadway in 1994. The sequel to the long-running smash The Best Little Whorehouse in Texas reunited that show’s creators: songwriter Carol Hall, director-choreographer Tommy Tune, and book writers Larry L. King and Peter Masterson. Whatever problems the show may have had onstage, the well-produced recording is brassy, occasionally campy, and full of enjoyable music. Hall’s score alternates between country-style melodies and a lush Vegas sound.  If you think you’d enjoy hearing a Broadway chorus chanting “Keep It Up for A. Harry Hardast,” this album belongs on your shelf. The opening number, “Let the Devil Take Us,” bursts with old-time Broadway vitality. Throughout, the performers sound like they’re having fun, even if they collectively press the gas pedal all the way to the floor in an effort to make the show work. The wink-nudge jokes and showbiz tricks pile up, and the dialogue swatches on the CD — as well as the notes in the accompanying booklet — convey an idea of the plot’s complexities. But by the time the recording ends with a patriotic flourish and a medley-style curtain call, only the most stone-hearted will not be at least partly won over. Dee Hoty sings “Picture Show” with a smile in her voice, puts over “I’m Leavin’ Texas” well, effectively superintends the phone-sex number “Call Me,” and has a charming duet with Scott Holmes, “It’s Been a While.” Peter Matz (orchestrations) and Wally Harper (vocal and dance arrangements) do excellent teamwork; just listen to the “Bankity-Bank” section of “I’m Leavin’ Texas,” and you’ll hear how the creativity of these two men gives the music a slick sheen.  — Morgan Sills