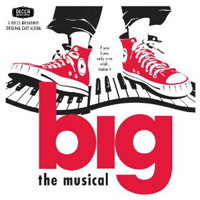 (1 / 5) Onstage, Big was a textbook example of how a top creative team with all the right intentions could destroy the charm of a beloved film. On disc, the score by Richard Maltby, Jr. and David Shire provides sporadic enjoyment, even if it’s somewhat overbearing. John Weidman’s book closely follows Gary Ross and Anne Spielberg’s screenplay: Josh (Patrick Levis) is a frustrated 12-year-old who wakes up one morning in the body of an adult (Daniel Jenkins). He runs off to New York, becomes a successful toy executive, and falls in love with a colleague named Susan (Crista Moore). The overture starts things off on an exciting note, and the opening number, “Can’t Wait,” sets the right tone of generation-gap exasperation. But the songs tend to dwell on the characters’ feelings when they’re not straining for exuberance; this is especially true of “Fun,” in which Josh kicks up a ruckus at F.A.O. Schwartz with the toy magnate MacMillan (john Cypher). The quieter numbers work best — especially “Stop, Time,” sung by Josh’s mother (Barbara Walsh), and “I Want to Know,” sung by Josh when he realizes that he’s going to spend the night with Susan. There’s also a catchy chorus number, “Cross the Line,” performed at a toy company party. But too much of the score, especially as arranged by Doug Besterman, is bombastic and full of false high spirits.  — David Barbour