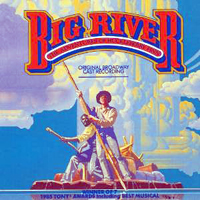 (3 / 5) Country-music songwriter Roger Miller furnished the score for this musical version of the Mark Twain classic Huckleberry Finn, and the result is a twangy Broadway sound that’s just right for the beloved tale. The rollicking “Muddy Water” and the more serene “River in the Rain” represent Miller at his best, while quirky comic numbers such as “Hand for the Hog” (Tom Sawyer’s tribute to his porcine pals) illustrate why Miller is also well known as a novelty songwriter. His skill as a tunesmith is unimpeachable here — but his lyrics, while frequently quite clever, are sometimes too simplistic or repetitive for a Broadway book musical. “Waitin’ for the Light to Shine,” for instance, may be the show’s most melodically beautiful number, but there’s little to distinguish it from any other gospel song. As far as good show-tune writing is concerned, Miller does prove himself with the lively opener “Do Ya Wanna Go to Heaven?”and the affecting “Leavin’s Not the Only Way to Go.” The finest performances on this disc are by Daniel Jenkins as Huck and Tony Award-winner Ron Richardson as his best friend, the runaway slave Jim. And a pre-Roseanne John Goodman does a memorable turn as Huck’s crazy father, Pap, railing comically against the “Guv’ment.” — Brooke Pierce