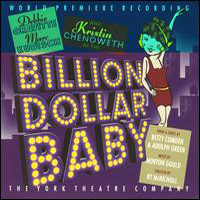 (1 / 5) Betty Comden and Adolph Green followed On the Town with this disappointment, a satire of the 1920s. Except for a dance sequence that appeared in Jerome Robbins’ Broadway, the 1945 show was largely forgotten until a staged concert performance at the York Theatre led to this recording. In the title role, Kristin Chenoweth chisels her way to the top, going from failed beauty-contest entrant to gangster’s moll and landing a billionaire just as the stock market crashes. Among her victims are Debbie Gravitte as a Texas Guinan-like nightclub owner, Marc Kudisch as a mob figure, and Richard B. Shull as the bank account of her dreams. In general, Morton Gould’s score lacks distinction, and the many dance interludes have been condensed in James Bassi’s four-piece orchestrations. The celebrated Comden and Green wit isn’t always in evidence, but Gravitte gets the best numbers — “Broadway Blossom” and “Havin’ a Time” — and Kudisch delivers a jazzy item called “Bad Timing.” Considering that she has the title role, Chenoweth has relatively little to do (the part was written for dancer Joan McCracken), and her numbers, including “Dreams Come True” and “Faithless,” are forgettable. Still, even if this show is no lost classic, fans of the cast members and of Comden and Green will want to give the CD a spin.  — David Barbour