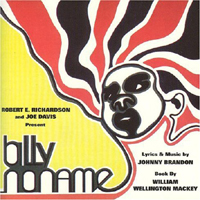 (2 / 5) An interesting autobiography of a fictional black playwright who is frequently angry and sometimes simply yearning, this musical covers his life from conception (in a street rape) through World War II, the civil rights movement, and the death of Martin Luther King (the final song is titled “Burn, Baby, Burn!”). The playwright ponders his role in the struggles of his era, but the ending of the show offers no answers. Of course, it’s impossible to know from the cast album how detailed and skillful William Wellington Mackey’s script is. The songs, by Johnny Brandon, travel confidently through the story’s 30 years, moving easily along with swing, rhythm and blues, early rock, and the sounds of the late 1960s. Although there’s not a lot of dramatic musical writing here, the tunes are mostly vibrant and rhythmic and it’s certainly easy to accept them as the language of these characters. The title role is uncommonly well sung by Donny Burks, and there are fine supporting performances by Alan Weeks, Hattie Winston, and Urylee Leonardos.  — David Wolf