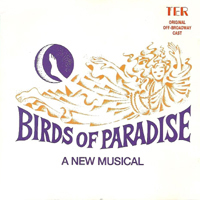 (4 / 5) On hearing this recording, listeners are bound to wonder why the show was not more successful. The score is filled with intricate, catchy melodies by David Evans and intelligent, witty lyrics by Winnie Holtzman. From start to finish, the performers sing and act as if they have discovered a pot of gold. The opening number, “Too Many Nights,” cleverly introduces actors in a community theater awaiting the arrival of someone who’s coming to direct them in a new musical. Two other highlights are Todd Graff’s duet with Crista Moore in the exciting “Coming True,” and Donna Murphy, Mary Beth Peil, and Barbara Walsh joining their powerhouse voices in the title song. When Graff and Peil confront each other in “After Opening Night,” it’s engrossing and moving. Some of the comedic numbers may not work very well outside of the show’s context, but John Cunningham’s “Somebody,” J. K. Simmons’ “She’s Out There,” and Peil’s “You’re Mine” are among the other fine songs in this top-notch score. Also worthy of note is the lovely ballad “Imagining You.” The show was directed by Arthur Laurents, and it seems clear that he encouraged the writers to spread their wings. This album is altogether necessary for discriminating enthusiasts.  — Jeffrey Dunn