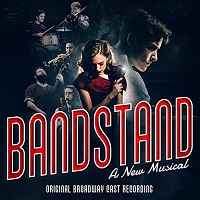 (3 / 5) In Bandstand, composer Richard Oberacker and Robert Taylor, who co-wrote the book and lyrics with Oberacker, created an original musical set in the 1940s, but with echoes that resonate today. At its heart is newly discharged WWII veteran Donny Novitski (Corey Cott). Though the show opens with people proclaiming that everything will be “Just Like It Was Before” the war, this is obviously not true; Donny can’t find work in his old haunts, Cleveland’s jazz clubs, and he’s plagued with PTSD.  A “Tribute to the Troops” competition inspires him to form a band of his former brothers-in-arms. With braggadocio covering desperation, Cott turns “Donny Novitski” into a character-defining piece, as he hopes his project will “block out the mem’ries.” The group assembles in the zippy “I Know a Guy,” and it’s clear that all of them carry mental and/or physical scars from the war. They’re joined by Julia Trojan (Laura Osnes), the widow of Donny’s war buddy, who just happens to be a singer and a poet. Osnes’s silvery tones and the extraordinary level of nuance she packs into her singing are highlighted in several numbers, from a song about Julia’s struggles as a Gold Star wife (“Who I Was”) to the torchy “Love Will Come and Find Me Again.” The latter deftly works on several dramatic levels: as a diegetic performance piece, an indication of the increasing attraction between Donny and Julia, and a reflection of her emotional growth. Beth Leavel adds depth to any show, so one wishes she had more to do as Julia’s mother, but she does get to deliver the second act powerhouse “Everything Happens.” Some tracks on the album showcase the vocal and instrumental talents of the other band members: Alex Bender, Joe Carroll, Brandon J. Ellis, James Nathan Hopkins, and Geoff Packard. Running through the orchestrations by Bill Elliott and Greg Anthony Rassen are variations on Gene Krupa’s fabled drum rhythms — first as explosions in a war flashback, then haunting Donny’s nightmares, and finally as the pulsing beat of New York City. Bandstand’s plot wraps up a bit too conveniently, but this recording has a good deal to offer. — Laura Frankos