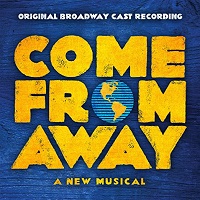 (3 / 5) Alhough they’ve been a songwriting team for years, husband and wife David Hein and Irene Sankoff made their Broadway debut with the musical Come From Away. The show is based on the true story of a small Newfoundland town’s locals taking in more than 7,000 passengers from diverted airplanes on 9/11/2001, offering food, clothing, and shelter without a moment’s hesitation. At first glance, Come From Away shouldn’t work; Hein and Sankoff’s lyrics are often rough, and their book tends to lean heavily on exposition. Plus,  the subject matter, though not directly about the events of 9/11, does deal with consequences of the tragedy. But for all of of that, the show succeeds — largely because, despite wearing its heart on its sleeve, Come From Away never feels forced or overly earnest. If Hein and Sankoff are not great lyricists, their music, orchestrated with pulsing vitality by August Eriksmoen, is remarkably inventive and thrilling; and their book, though understandably truncated on the album, employs a great deal of intelligence and a surprising amount of humor to win over the audience. With charmingly honest performances by an excellent ensemble cast, the album provides a strong representation of these effects, even if also underlines some of the show’s rougher elements. First-time listeners may roll their eyes during pedestrian moments such as “Lead Us Out of the Night” or “Costume Party,” but by the time they get to the roof raising “Screech In,” they’ll likely find themselves leaning into the show’s charm and enjoying the rest of the recording. They might even wipe away a tear or two. — Matt Koplik