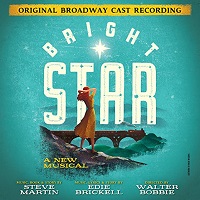 (2 / 5) Steve Martin is a man of many talents: actor, playwright, stand up comic, novelist. And here, with Edie Brickell as his collaborator, he adds musical theater writer to the list. Martin’s original story for Bright Star centers on both Billy Cane, a young Southern man striving to become a writer (A.J. Shively), and Alice Murphy, the austere female publisher who mentors him (Carmen Cusack). Due to the story’s setting and Martin’s familiarity with the genre, the score is written with a heavy bluegrass influence. (The reliable August Eriksmoen keeps the banjo plucking with his blood-pumping orchestrations.) Given Martin’s many previous successes, it’s a shame that Bright Star is such a mixed bag as a musical, and even more so as an album. While Martin and Brickell have a gift for writing music that can be quietly moving (“It Can’t Wait”) or enticingly catchy (“Another Round”), their lyrics prove to be a major obstacle that the score and the show can’t quite get past; they often lack adequate insight into characters’ psyches or fail to propel the plot forward, tending to be repetitive and broad. (“A Man’s Gotta Do” is a prime example.) The cast is strong overall, though the talents of Broadway veterans Dee Hoty and Stephen Bogardus are sadly wasted in small roles that get lost in large group numbers or throwaway songs like “She’s Gone.” Luckily, the album has radiant performances by Cusack as Alice and Paul Alexander Nolan as her childhood love. In their first song together, “Whoa Mama,” the recording begins to pick up steam as Cusack’s throaty alto blends beautifully with Nolan’s pure tenor, creating intimate chemistry. The other songs these two share together (“It Can’t Wait,” “What Could Be Better,” “I Had a Vision”) are further highlights of the album. Some of the remaining items are very pleasant listening (“Asheville,” “Bright Star”), but it’s only when Cusack and Nolan take focus that Bright Star actually becomes a bluegrass musical. — Matt Koplik