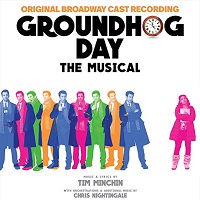 (4 / 5) After the immense artistic and commercial success of Matilda, Tim Minchin turned his efforts next towards adapting the beloved comedic film Groundhog Day, working with the film’s screenwriter, Danny Rubin. The central character is the egotistical, misogynistic weatherman Phil Connors (Bill Murray in the movie), who finds himself stuck living February 2nd over and over again in the small town of Punxsutawney. Rather than attempt to slavishly recreate the film’s most famous moments, Rubin and Minchin delved into the source material and truly adapted it to give us an endlessly inventive and rewarding musical with a perfect leading performance by Andy Karl. Hilariously smug at the start, Karl believably navigates Phil’s journey from narcissist to humanist, all the while staying well outside of Murray’s large shadow. Minchin’s score is not quite as tightly crafted as his score for Matilda, but it’s more experimental in terms of structure and style, and is ultimately a more mature work. Of course, Minchin still allows himself some fun shock humor with the cheeky “Stuck” and the hillbilly hoedown “Nobody Cares,” but these songs are just facets of a multidimensional score that never feels disjointed, partly thanks to Christopher Nightingale’s astute orchestrations. If the cast recording has one fault, it’s the surprising lack of dialogue included here. Not every Broadway album needs to offer dialogue to be successful (see, for example, the original Oklahoma! or A Little Night Music), but given how important director Matthew Warchus’s staging was to the storytelling of the original production, the lack of context makes tracks like “Philandering” and “Hope” lose some of their comedic edge. On the other hand, the small amount of dialogue we do hear on the album allows Groundhog Day to show its heart. The uplifting “If I Had My Time Again” is not just catchy but is also deceptively moving in its optimism, as Phil’s producer Rita (an endearing Barrett Doss) convinces him that this endless cycle he’s in is actually a gift. And when the two finally connect in the show’s finale “Seeing You,” listeners may be surprised to find themselves so moved by a score that earlier rhymed “toxins” with “constipated oxens.” But that’s musical theater for you. — Matt Koplik