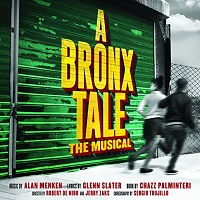 (2 / 5) In 1989, Chazz Palminteri told the story of his youth in the Bronx as a one-man play, chronicling his conflicting loyalties to his working-class father, Lorenzo, and the charismatic local mob boss, Sonny. A 1993 film version starred Palminteri as Sonny and Robert De Niro, who directed, as Lorenzo. For the musical, Palminteri penned the libretto while De Niro co-directed with Broadway veteran Jerry Zaks. It conjures up memories of Jersey Boys (music, gangsters, lots of narration) and West Side Story (gritty neighborhoods in ethnic conflict, lovers from opposite sides). Alan Menken’s versatile score, evoking nearly every style of music heard on a transistor radio in the sixties, is the most enjoyable facet of A Bronx Tale. The composer returns to his Little Shop of Horrors doo-wop roots in the effective opener, “Belmont Avenue,” as Calogero (Bobby Conte Thornton) vividly describes the Italian-American neighborhood while “next year’s Frankie Vallis” harmonize on the corner. There’s a Sinatra-style swing tune (“One of the Great Ones”) for Sonny (a gruff yet sexy Nick Cordero), driving funk in “Hurt Someone,” a pop love duet (“Out of Your Head”), and Motown soul for the black neighborhood kids (“Webster Avenue”). Unfortunately, other than in the scene-setting descriptive numbers, Glenn Slater’s lyrics often rely  on clichés and sentimentality. “Look To Your Heart” is a maudlin piece of advice given by Lorenzo (an underused Richard H. Blake) to young Calogero (Hudson Loverro, who holds his own with his elders); Lorenzo’s wife (Lucia Giannetta) reprises it, and the inescapable title phrase worms its way into other songs. Thornton and Ariana DeBose handle “Out of Your Head” well enough, but the lyrics could fit any generic pair of star-crossed lovers, while Cordero’s“Mack the Knife”-like ditty about “Nicky Machiavelli” is marred by some painful rhymes and syntax. Slater’s on better footing in “I Like It,” as young Calogero revels in the respect, free Cokes, and comic books that come with being Sonny’s favorite. The show concludes with “The Choices We Make,” and Lorenzo says, “It’s just another story.” One might wish it were told with more originality and verve. — Laura Frankos