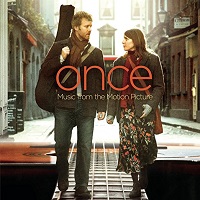 (4 / 5) This is the deservedly popular soundtrack album of a gorgeously bittersweet indie film, set in Dublin, about the brief but intense romance and songwriting partnership of an Irish busker (Glen Hansard) and a Czech immigrant (Marketa Irglova). Their love affair ends due to other entanglements, but not before they record a demo together — and he buys her a piano as a parting gift. However close to real life the events and characters of the story may or may not be, the whole thing is lent a wonderful air of authenticity by the fact that all of the songs heard in the film and on the recording were written and performed by Hansard and Irglova. The gentle, simple, almost hypnotically lovely ballad “Falling Slowly” was the movie’s big hit, charting in Ireland, Canada, the U.S. and Brazil, and winning an Academy Award for Best Original Song. But there are several other delights here, such as “Say It To Me Now,” “Leave,” and the deliciously quirky “Broken Hearted Hoover Fixer Sucker Guy.” (The Hansard character repairs vacuum cleaners to earn a living.) This recording is eminently listenable and thoroughly enjoyable in its own right, aside from its interest as the soundtrack of a film that served as the basis for one of the most unexpected Broadway musical hits of its era. – Michael Portantiere 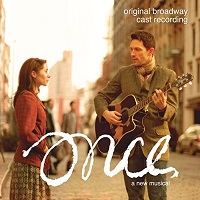 (4 / 5) It probably never occurred to most fans of the film that a stage musical version of Once would ever be created or that it would be successful anywhere, let alone on Broadway, which generally tends to traffic in larger,  faster-paced, less subtle entertainments. But the brief-candle romance of the lovers at the center of the story is potent enough that one could envision such a musical connecting with audiences if pains were taken to assure that the intimacy of the piece was retained. Which is exactly what happened. With a book by Enda Walsh (based on the screenplay by John Carney) and a score comprised almost entirely of the Hansard-Irglova songs from the movie, Once premiered at the American Repertory Theatre (ART) in Cambridge, MA  in 2011 before transferring to the New York Theatre Workshop and then to Broadway, where it collected a bunch of 2012 Tony Awards — including Best Musical — and achieved a three-year run. Among the several wise decisions made in adapting the film to the stage were Bob Crowley’s unit set design, which created the feel of a homey Irish pub; and the fact that the cast also served as the onstage orchestra. Steve Kazee as “Guy” is a real charmer in these songs, sounding far more comfortable with this style of music than that of his previous big Broadway lead, Starbuck in 110 in the Shade. He and Cristin Milioti as “Girl” make beautiful music together in “Falling Slowly,” “If You Want Me,” and “When Your Mind’s Made Up.” She also does a persuasive job with “The Hill,” though some may find her rather thick Czech accent a bit distracting on repeated listening. The ensemble of actors/musicians includes familiar names such as as David Patrick Kelly and Anne L. Nathan, along with some super-talented newcomers. Cheers to them as well as to director John Tiffany and musical supervisor Martin Lowe for not radically changing or distorting Once in the stage transfer. – MP