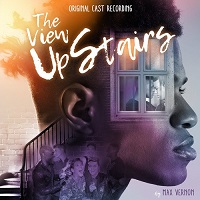 (3 / 5) A tragic true-life story inspired this musical about The UpStairs Lounge, a popular gay bar in the French Quarter of New Orleans that was destroyed by arson in 1973, resulting in the deaths of 32 people. Max Vernon wrote the book, music, and lyrics. The show employs an interesting narrative device centered around a present-day fashion designer, Wes (Jeremy Pope), who inquires about renting the space where the UpStairs once existed, and who there encounters and interacts with its denizens through a sort of time warp. Among them are the hard-drinking house pianist (Randy Redd), the bulldyke bartender (Frenchie Davis), a budding young Puerto Rican drag queen (Michael Longoria) and his mother (Nancy Ticotin), and the outrageously campy resident diva (Nathan Lee Graham). Also on hand are a priest of the Metropolitan Community Church (Benjamin Howes), a hustler (Taylor Frey) who forms a serious attachment with Wes, and the sketchy guy (Ben Mayne) whom we are led to think may be the one responsible for torching the bar after being ejected from it. While Vernon has trouble avoiding cliché in some of the show’s situations and dialogue, the time-warp setup allows for both jokes and dramatic points to be made as the UpStairs patrons school Wes about gay history and he tells them about the future. Vernon’s ingratiating, eclectic score well suits the characters and effectively sets the atmosphere for the tale, employing period song styles for the bar people and more modern sounds in some of Wes’s material (such as his opening number, “#householdname”). Highlights of the album include the opener, “Some Kind of Paradise,” led by Redd with soulful fervor; “World Outside These Walls,” led by Davis in excellent form; and the big, inspirational number “Theme Song,” featuring the amazing Graham. “Sex on Legs” is quite the show-stopper as delivered by Longoria, possessor of one of the most exciting voices to be heard on or off Broadway. The two prettiest songs in the score are the title tune, which serves as the finale; and “And I Wish,” not included in the Off-Broadway production but heard here as a bonus track, sung by Frey with great vocal beauty and deep emotion.  — Michael Portantiere