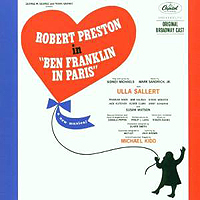 (4 / 5) Timing is everything, and this lush show about the life and loves of Benjamin Franklin is an excellent example of the right musical at the wrong time. With its melodic score and literate lyrics, it’s a winsome foray into the mind of Franklin if he had been a musical comedy star as well as a great statesman. But the show is only remembered today as a precursor to the more successful 1776, produced a mere five years later.  At any rate, the cast album represents a gem of a lost Broadway musical. It stars Robert Preston, fresh from his stage and screen triumphs in The Music Man; his performance leaps off of the recording and into your lap. The album also features charismatic singing by the Swedish musical theater star Ulla Sallert and the ingenue favorite Susan Watson. Many of the songs by Sidney Michaels and Mark Sandrich, Jr. are topnotch and appropriate to the subject and time period; two numbers, “To Be Alone With You” and “You’re in Paris,” were ghostwritten by the talented young Jerry Herman. Others lapse into a tired operetta genre but, on the whole, this album is a joy to hear and a prime example of showmanship from Broadway’s golden era.  — Gerard Alessandrini