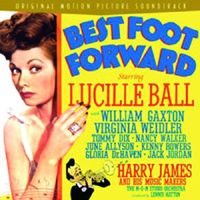 (4 / 5) Good News was the college musical par excellence in the 1920s, and Best Foot Forward did the same for high schools when it opened on Broadway in 1941. The rousing “Buckle Down, Winsocki” became an instant classic, and the show’s young and gifted creators, Hugh Martin and Ralph Blane, promptly moved to Hollywood. Much of the Broadway cast went with them for the unusually faithful movie version, headlined by Lucille Ball (vocals dubbed by Gloria Grafton) and the Harry James orchestra. Among the surprises here are an overture that’s not heard in the film and the added-then-cut “Who Do You Think I Am?” If the James orchestra is decidedly upscale for Winsocki High — “Two O’Clock Jump” is sensational — there is abundant energy in the air, as a talented cast of youthful pros rips through Martin and Blane’s funny and spirited score. Possibly best of all is the young Nancy Walker, who, with June Allyson and Gloria de Haven, makes “The Three B’s” one of the film’s highlights. Tommy Dix, short of stature and big of voice, had a supporting role in the Broadway show but was upgraded to male lead in the movie; his “Buckle Down, Winsocki,” moved to the 11-o’clock spot, is a stirring conclusion to a fine film. — Richard Barrios 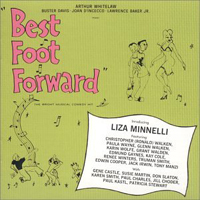 (3 / 5) When Best Foot Forward was revived in 1963, Martin and Blane added a sort-of-new song, “You Are for Loving,” originally written for a television production of Meet Me in St. Louis. The interpolation was deemed necessary for a headline-grabber in a supporting role: Liza Minnelli made her New York stage debut at the age of 17 in a well-received production with an energetic young company that also included a pair of brothers named Glenn and Christopher Walken. Judging from this recording, the cast had just the kind of enthusiasm needed for this show. Lead Paula Wayne is particularly attractive in the rueful “Hollywood Story,” and “The Three B’s” is almost as much of a showstopper as it is in the movie. (When Wayne left the show, she was replaced in the role of the washed-up movie star by a real-life washed-up movie star, Veronica Lake.) In the secondary role of Ethel, Liza throws off the show’s balance somewhat, but no complaints can be made over her youthful glow or her integration into the ensemble numbers. With its modest piano accompaniment, this performance has the appropriate air of a high school musical done by an unusually gifted group of students.  — R.B.