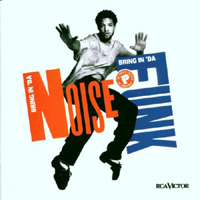 (4 / 5) The songs aren’t the main point of this brilliant revue, which uses dance to chart the history of black men in America. The hip, hip-hop survey stretches from the days of slavery, when people were brought to this country in chains, to the “freedom” of today, when hailing a taxi to certain neighborhoods is still a challenge. It makes cogent stops at cotton fields, factories, sound stages, and prisons. Savion Glover, the musical’s driving force, astounded audiences with his groundbreaking approach to tap dancing. He calls what he does “hitting” — and, in an endless series of lightning fast, bravura movements, he changed the face (the feet?) of an ever-adaptable art form. Considering that dance was the impetus for Bring in ‘Da Noise, Bring in ‘Da Funk, which was skillfully directed by George C. Wolfe, one might expect that the cast recording would suffer. But Glover and Wolfe knew that rhythm was the underpinning of the show, and the album features lots of recorded footwork. A rock contingent headed by pianist Zane Mark provides the metaphorical floor on which Glover and fellow dancers Baakari Wilder, Jimmy Tate, and Vincent Bingham do their forceful, fanciful stuff. The music is by Mark, Daryl Waters, and Ann Duquesnay. Reg E. Gaines contributed the book, which covers some fantastical and brutal territory, and some of the lyrics, which do the same. Jeffrey Wright speaks most of the narration, and Duquesnay, who boasts a great growl, sings most of the songs, some of the time hurling lyrics that she herself came up with. Accompanying the CD is a booklet in which each segment is helpfully described. When musical theater historians look back on the 1990s, they will agree that this innovative show was one of the decade’s true triumphs.  — David Finkle