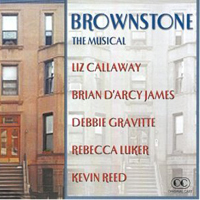 (3 / 5) Five city dwellers share a brownstone but only occasionally interact with one another in this show by Josh Rubins, Andrew Cadiff, and Peter Larson. Brownstone feels more like a song cycle than a full-blown musical, which may explain why it disappeared after two brief Off-Broadway runs in the mid-1980s. This studio album, recorded after a well-received revival at the Berkshire Theatre Festival, makes a strong case for the score. Liz Callaway is Claudia, who is getting over a recent breakup. Brian d’Arcy James is Howard, a struggling novelist, and Rebecca Luker is Mary, his wife, who wants their future to include children. Debbie Gravitte plays Joan, a high-powered lawyer with a boyfriend in Maine. Kevin Reed is Stuart, the new guy, eager to find excitement and romance in the big city. Song by song, there’s much to enjoy here. Highlights include the scene-setting “Someone’s Moving In”; “Fiction Writer,” in which Howard fantasizes grinding out a best-selling thriller; “Not Today,” Joan’s dream of another life; and the achingly beautiful “Since You Stayed Here,” in which Claudia reviews the changes in her life after her break with her lover. The problem with the show is cumulative: Practically nothing happens, and the single note of wistful longing mixed with ambivalence is stretched extremely thin. Then again, with a first-class cast and a range of material that runs from not bad to very, very good, there’s much to like here. Plus, there are nice orchestrations by Harold Wheeler throughout.  — David Barbour