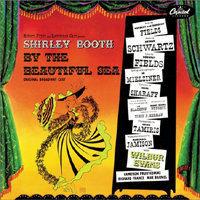 Original Broadway Cast, 1954 (Capitol/DRG) No stars; not recommended. Shirley Booth never had much luck with musicals. Witness this elegant piece of hackwork — which, at eight months, ran longer than most of her shows. Here, she’s cast as vaudeville star Lottie Gibson, who, with her father, owns a boarding house on Coney Island. (Herbert and Dorothy Fields’ libretto is set in 1907.) The plot consists of some thoroughly manufactured romantic mix-ups, and the score, by Arthur Schwartz and Dorothy Fields, is overburdened with interchangeable production numbers that could have been authorized by the Coney Island Chamber of Commerce. (The weirdest of them is “Hooray for George the Third.”) Booth has one dryly amusing solo, “I’d Rather Wake Up By Myself,” in which she recalls her many exes; and Mae Barnes, as Lottie’s black housekeeper, sasses up a couple of tunes (“Happy Habit,” “Hang Up”). In the role of Booth’s love interest, a Shakespearean actor, Wilbur Evans is suitably stentorian. Robert Russell Bennett’s orchestrations add a bit of zing. Still, minutes after this disc is finished, you’ll have forgotten that you ever listened to it.  — David Barbour