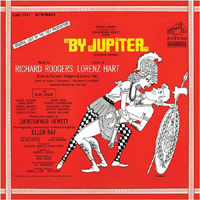 (3 / 5) While this production did not achieve great success onstage, it did yield a cast album to be reckoned with. Most important, this is the only complete recording of one of the longest running musicals by Richard Rodgers and Lorenz Hart; the original 1941 production opened before cast albums became a popular commodity. The score contains some of the team’s catchiest up-tempo numbers (“Ev’rything I’ve Got,” “Jupiter Forbid”) and loveliest ballads (“Wait Till You See Her,” “Nobody’s Heart,” “Careless Rhapsody”), all performed with gusto. Bob Dishy is very suitable as Sapiens, the reluctant groom to the Amazon Queen Hippolyta, whose numbers are sensationally belted out by Jackie Alloway. Meanwhile, the songs of the secondary romantic couple are beautifully delivered by Sheila Sullivan and Robert R. Kaye. — Jeffrey Dunn