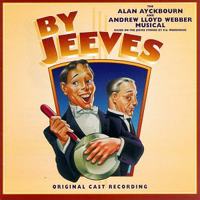 (3 / 5) Andrew Lloyd Webber and Alan Ayckbourn cleverly reworked their 1975 flop ]eeves into this chamber-size musical chronicling the misadventures of the hapless, rich-and-spoiled-but-lovable Bertie Wooster and his invaluable manservant. In size and style, it’s not that different from the musical comedies that the characters’ creator, P. G. Wodehouse, wrote with Guy Bolton and Jerome Kern. Lloyd Webber, after many years of creating supersized neo-operettas with awful lyrics, downscaled his ambitions and found his most sympathetic wordsmith yet; the distinguished playwright Ayckbourn turns out to be a deft lyrical craftsman with a gift for light verse. The modestly orchestrated songs are slight but ingratiating, and this London cast recording sets them up quite brilliantly with a running commentary by Jeeves and Wooster that untangles the convoluted plot with precision and aplomb. Malcolm Sinclair is an ideal gentleman’s gentleman, Steven Pacey a dexterous Wooster. Unfortunately, Lucy Tregear as Honoria Glossop and Cathy Sara as Stiffy Byng grate their way through such good songs as “Half a Moment” and “That Was Nearly Us.” Also, pleasant though the proceedings generally are, they’re a little forced; you can almost hear the creative team in the sound booth, yelling “More charm! More charm!” — Marc Miller 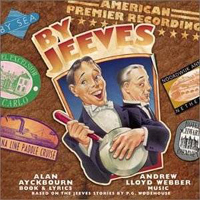 (2 / 5) In New York, By ]eeves honorably attempted to inject some Wodehousian fun into the very tense, post-9/11 Broadway atmosphere. The show struggled for about two months, shuttering the night before New Year’s Eve. The selling points of this cast album are mainly on the distaff side. Donna Lynne Champlin’s Honoria Glossop is more vocally assured than Lucy Tregear’s on the London recording, but Champlin, too, goes overboard, hamming through “That Was Nearly Us.” Emily Loesser’s Stiffy Bing has it all over Cathy Sara’s turn in London. Becky Watson’s Madeline Bassett is charming in “When Love Arrives” and “It’s a Pig!” As Bertie Wooster and Bingo Little, respectively,John Scherer and DonStephenson sing well. But the CD is poorly packaged, with only a few thumbnail photos and no lyrics or plot synopsis. And while the London cast album has all that smart verbal interplay between Jeeves and Wooster, this edition gives us just the songs. Martin Jarvis’ Jeeves is on hand for a few tracks and then slips discreetly away — very Jeevesian of him but, plot-wise, it leaves us hanging.  — M.M.