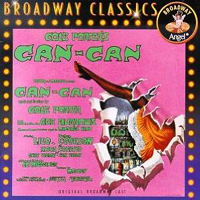 (5 / 5) Although Gwen Verdon was catapulted to stardom in this pizzazz-y, Broadway-Gallic concoction, the true star of the show is Cole Porter. The great composer-lyricist wrote many songs dedicated to the “o-la-la” aspects of the Paris he adored, and Can-Can is his most melodic excursion into Parisian love, sex, and nightlife. The lyrics are as witty and lusty as the infectious music in a score that includes the much-loved standards “It’s All Right With Me,” “I Love Paris,” and “C’est Magnifique.” Happily, the cast album captures the exuberance of a live Broadway show, its clear, high-fidelity monophonic sound and crisp performances combining to make it an excellent example of 1950s showbiz chutzpah. Lilo, the lead chanteuse, belts out her numbers with tremendous joie de vivre. Her most effective song is the naughty, defiant “Live and Let Live.” Her authentic French accent adds to the fun, although it may take some doing to decipher all of Porter’s clever uses of the word “can” when Lilo tongue-twists her way through the title song. Verdon is heard only briefly on the recording, since she was the dancing star of the show, but her comedy number with the inimitable Hans Conried, “If You Loved Me Truly,” is a fun throwaway song. Peter Cookson is the stalwart baritone who beautifully, if somewhat stiffly, renders great lines like “It’s the wrong time and the wrong place.” His best number, “I Am in Love,” is a little-known Porter masterpiece, with such choice lyrics as “Should I order cyanide or order champagne?” You should definitely order champagne while listening to this gem. — Gerard Alessandrini 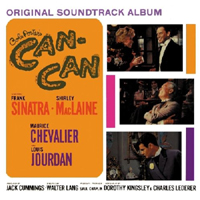 (2 / 5) Frank Sinatra, Shirley MacLaine, Maurice Chevalier, and Louis Jourdan were huge stars when this soundtrack for the film version of Can-Can was recorded. With all those famous names over the title, the flick was a hit, but an avalanche of Hollywood kitsch suffocated almost all of the charm and wit of Cole Porter’s Broadway show. Musical director Nelson Riddle provided overblown, frantic orchestrations. This isn’t music to drink French champagne by, it calls for several glasses of scotch in the leopard-skin lounge of a Pasadena golf course. However, Porter’s songs are so durable that even their saloon interpretations by Sinatra and MacLaine are somewhat appealing on their own terms. The French co-stars fare better: Chevalier’s devil-may-care performance of “Just One of Those Things” (added to the score) has its own charm, while Jourdan’s rendition of “You Do Something to Me” is surprisingly well sung. Indeed, it may be one of the most enchanting versions of the song ever recorded. But too much of the show score has been eliminated or altered. For example, although the title song is heard as an instrumental, MacLaine never gets to sing those witty Porter lyrics. Some of the better ballads, such as “Allez-Vous En,” are missing altogether, and “I Love Paris” is bizarrely performed as a romantic duet between Chevalier and Sinatra! — G.A.