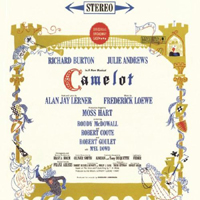 (5 / 5) Composition, performance, and audio technology all came together to make this a first-rate cast recording. Although Camelot is not as highly regarded as Lerner and Loewe’s masterpiece My Fair Lady, this album makes it sound like one of the best Broadway musicals of all time. Richard Burton in the role of King Arthur is at his absolute peak as a great stage actor, bringing extra substance to the character by virtue of his classical training. Surprisingly, Burton’s singing voice is rich and clear; he easily sails through the score, serving the Frederick Loewe melodies beautifully and delivering the witty and romantic Alan Jay Lerner lyrics as if they were the immortal words of the Bard himself. Julie Andrews is Guenevere, and her performances of such songs as “The Simple Joys of Maidenhood” and “I Loved You Once in Silence” are as good as anything she has ever recorded. To round out the perfect casting, Robert Goulet is Lancelot; when he introduced the great love song “If Ever I Would Leave You,” Goulet had one of the finest baritone voices ever heard on Broadway. Roddy McDowell and Robert Coote are also on hand for some star-power fun. The book of Camelot, based on the massive novel The Once and Future King, by T. H. White, has often been called unwieldy; but with the score isolated, the album is a gem. The songs are variously intricate, operatic, lyrical, charming, and delightfully funny. Meticulously conducted by Franz Allers, the orchestrations by Philip J. Lang and Robert Russell Bennett are a fine example of the best of those written during the golden age of Broadway musicals. By 1960, stereophonic recording on magnetic tape had been perfected and, even by today’s digital standards, this glorious score sounds magnificent here. Avid collectors may want to seek out the original vinyl LP edition; look for a laminated, blue-and-gold, gatefold album loaded with stunning color photos that give it a lavish storybook quality. You may even find that a copy of the LP in good condition sounds more expansive and warmer than subsequent compact discs editions of the recording. It’s a grand memento of the glamorous Kennedy era and a time when Broadway shows were the ultimate in entertainment. — Gerard Alessandrini 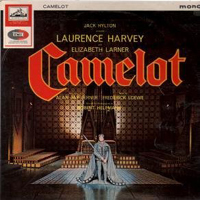 (2 / 5) This recording lacks the fine musicality of the original Broadway cast album. In the role of King Arthur, Laurence Harvey displays a resonant voice, and his classical training and romantic appeal are evident. What’s missing is a melodic lilt to his voice, and, unlike Richard Burton, Harvey cannot sustain notes; the tempi of many of his songs are too fast, presumably in deference to his vocal limitations. His Guenevere, Elizabeth Larner, has a beautiful voice and delivers her songs very appealingly, but in her case and that of Barry Kent as Lancelot, listeners may feel as if they’re hearing standbys for the absent stars Julie Andrews and Robert Goulet.  Among the other soloists heard on the recording are Nicky Henson as Mordred and Josephine Gordon as Nimue. The album does include a recording of “The Joust,” which is not on the Broadway album. If only for that reason, it may be of interest to collectors. — G.A. 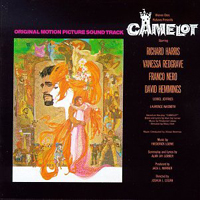 (3 / 5) Wonderful orchestrations almost elevate this Hollywood version of the enduring Broadway hit into the category of great recorded music — but not quite. The team of Alfred Newman (conductor), Ken Darby (choral arrangements), and Edward Powell (orchestrations) gave the Lerner-Loewe songs the royal treatment, but uneven vocal performances keep this album from equaling the Broadway recording as a fully satisfying performance of the score. Although Vanessa Redgrave does a fine acting job in the film as Guenevere, her singing is barely adequate; she does her best to “act” her way through songs written for the voice of Julie Andrews, but she seems to be trying too hard for effect. As a result, Redgrave sounds campy in many of her musical moments. Richard Harris is a better singer with a greater range, but his acting is overwrought and forced in the role of King Arthur. Gene Merlino, dubbing Lancelot’s songs for Franco Nero, fares better. Fans of this durable score may delight in the magnificent arrangements of the overture and choral selections such as “Follow Me.” If Warner ever decides to issue a more complete version of the soundtrack album, including the Korngold-like treatment of Loewe’s background score, that would be a must-have item. As it is, this edition is disappointing. — G.A. 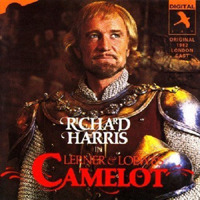 (1 / 5) Richard Harris, who starred as King Arthur in the movie of Camelot, toured extensively in the role. By the time he recorded this London cast album, his performance was as petrified as aged wood, and anything that was good about his characterization in the film had been obliterated. The concept of the Lerner-Loewe musical was to portray King Arthur as a young, vibrant leader, not a stodgy old monarch. When Harris made the film, he was an attractive, sexually vital, youngish actor; when he returned to the part on tour years later, his age completely subverted the story. In this recording, Harris rasps his way through the jaunty title song and delivers an over-the-top performance more appropriate to the dusty old Shakespearean actor in The Fantasticks. By the end of the album, he is indulging in vocal histrionics that are ludicrous. Fiona Fullerton as Guenevere sounds quite lovely, but Robert Meadmore as Lancelot is no baritone; his voice has a bleating, high-tenor timbre that’s jarring. All in all, this recording is of little value except as one of the most unintentionally comedic cast albums of all time. Ultimately, Harris himself chisels its epitaph when, at the end, he screams insanely: “R-U-U-N-N, BOY! R-U-U-U-N-N-N!!!!” — G.A.