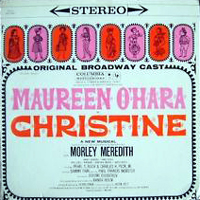 Original Broadway Cast, 1960 (Columbia/DRG) No stars; not recommended. Maureen O’Hara, in her only musical, is Christine FitzSimmons — an Irishwoman who journeys to India and falls in love with her son-in-law, an earnest doctor named Rashil Singh (her daughter is, thankfully, dead), only to realize that they are from Different Worlds. With lyrics like “Why, Shiva, do you desert me?”, this dreary soap operetta sounds like an amateur theatrical staged by the U.N. Security Council. There’s even a “UNICEF Song,” in which a pack of cute Indian tykes sing about the joys of vaccination. Pearl S. Buck and Charles K. Peck, Jr. were the luckless librettists; Paul Francis Webster’s lyrics are given to clunky meditations (“Where is the medicine for sorrow?”), and Sammy Fain’s music sounds like the score of an unreleased Douglas Sirk film. Broadway wise-crackers Nancy Andrews and Phil Leeds, inexplicably cast as Indians, sing a couple of comedy relief numbers about the differences between East and West, and then there’s the indescribable “The Lovely Girls of Akbarabad.” O’Hara’s singing is unexpectedly lovely, and one or two of the melodies are quite nice, but the rest of it is pure curried corn.  — David Barbour