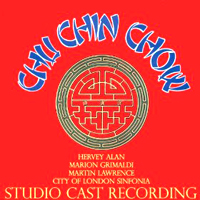 (4 / 5) Chu Chin Chow was a huge success on the London stage, where it ran from 1916 to 1921. A Broadway production, which had a shorter run, opened in 1917. Billed as a “Musical Tale of the East,” this was an extravaganza with an ensemble of 64, plus eight children! Chu Chin Chow was “the show to see” for British soldiers on their way to fight in The Great War. The CD combines cuts from two recordings of songs from the score, one from EMI and the other from World Record Club, that were first issued on LP in the late 1950s-early ’60s. EMI gave most of the male vocals to the excellent bass-baritone Inia Te Wiata, and there were new orchestrations by Brian Fahey; World assigned the songs per the show, and used the original arrangements. Frederic Norton’s music is lush and melodic in a quasi-Oriental style, while Oscar Ashe’s lyrics are less inventive, for the most part. Basically the story of “Ali Baba and the Forty Thieves,” with numerous additional plot lines and characters, the show is rather delicious nonsense. Beginning with the stately opening “Here Be Oysters,” the riches keep coming: the elegiac “Cleopatra’s Nile,” the comedic “When a Pullet Is Plump” and “Mahbubah,” the martial “We Are the Robbers of the Woods,” the heart-rending “I Long for the Sun,” and the exuberant “I’Il Sing and Dance,” among others. As a bonus, the CD contains several songs performed by members of the original 1916 cast, plus a couple from the 1934 film soundtrack. These recordings waft us back to a bygone theatrical era the likes of which we may never see or hear again. — Jeffrey Dunn