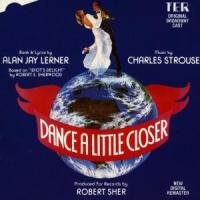 (2 / 5) Alan Jay Lerner’s sad farewell to Broadway was this 1983 one-nighter, loosely based on Robert E. Sherwood’s 1936 drama Idiot’s Delight and updated to the Cold War era. Len Cariou stars as entertainer Harry Aikens, working in a posh hotel in the Austrian Alps with his backup trio, The Delights. He encounters the girl who got away (Liz Robertson), now passing as British and sleeping with a Kissinger-like diplomat (George Rose); they play romantic cat-and-mouse games as Europe mobilizes for World War III. Broadway audiences definitely weren’t interested in Lerner’s musings about geopolitical conflict (“We may be headin’ / For Armageddon” goes one notorious couplet). The Act II opener, “Homesick,” is a low point as The Delights wax poetic about Three Mile Island, Love Canal, and the San Andreas Fault. There’s an excruciating subplot involving two gay guys who want an Anglican bishop to marry them, leading to a group theological debate (“I Don’t Know”). But when the score by Lerner and Charles Strouse sticks to a mood of romantic disenchantment, it has a glamorous sheen, and even when the lyrics are ridiculous, Strouse’s music is alluring. Harry’s lament, “There’s Always One You Can’t Forget,” is a great number, and Cynthia’s gold-digging ways are laid out in three sleek items: “No Man Is Worth It,” “Another Life,” and “On Top of the World.” Best of all is the title tune, with its downbeat melody and live-for-the-moment lyrics. Jonathan Tunick’s orchestrations are beautifully world-weary throughout. — David Barbour