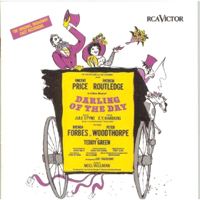 (4 / 5) This luckless show suffered from constant turnover on the creative team, arriving in New York without a credited librettist and closing after 31 performances. But Darling of the Day, as preserved on this disc, has one of Jule Styne’s most beguiling scores. The book, based on Arnold Bennett’s Married Alive, presents the dilemma of Priam Farll (Vincent Price), a Gauguin-like painter who returns to his loathed England after many years in the South Seas. Appalled by society and the art world, he assumes the identity of his deceased butler, even appropriating the latter’s feisty, marriage-minded pen pal (Patricia Routledge). Everything is perfect until some of Farll’s newer paintings make their way to market, igniting a scandal. Styne’s music is warmly inviting and well matched to E.Y Harburg’s wonderful, eccentric lyrics. (A sample: “It’s so utterly, ghastly beastly / When your life’s all famine without the feastly / And you live so nunnerly and so priestly.”) There’s a sweet quality to the waltz “Let’s See What Happens” and the deeply felt ballad “That Something Extra Special.” Price’s talk-singing can be a trial, but the album approaches greatness every time Routledge lets loose; she’s touching in the quieter numbers and absolutely blissful in such music-hall inspired fare as “It’s Enough to Make a Lady Fall in Love.” Her second-act showstopper “Not on Your Nellie,” a rowdy defense of middle-class life, practically leaps off the disc as Routledge makes sounds that are like nothing you’ve ever heard before. (She won a Tony for her performance.) This is a delightful score that more people should know about.  — David Barbour