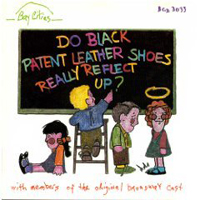 Original Broadway Cast Members, 1985 (Bay Cities/Original Cast) No stars; not recommended. No matter how “informed” the writer of a review is, the critique is largely a matter of opinion. Or as Cole Porter put it, “I like Offenbach, you do not / So what? So what? So what?” Which is my way of explaining that I greatly dislike Do Patent Leather Shoes Really Reflect Up?, even though I know the show has been hugely successful in stagings around the country and is, in fact, the longest running musical ever to play Chicago. It’s certainly possible that I would respond more favorably to it if I had attended parochial school or were a Catholic — or if, like the show’s main character, I’d fallen in love with a girl in the fifth grade, watched as she became a nun and then, years later, reunited with her after she left the convent. Not having had those experiences, I view this musical as unevocative nostalgia without the slightest bit of insight or wit. For the record, the music and lyrics are by Alaric Jans and James Quinn, the book by John R. Powers.  — David Wolf