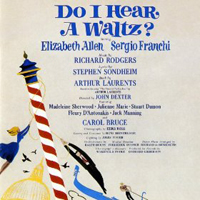 (4 / 5) Stephen Sondheim has often bad-mouthed Do I Hear a Waltz? — perhaps because it can’t compare to his trail-blazing hits, and also because Sondheim apparently wrote some lyrics that were not acceptable to composer Richard Rodgers and, therefore, didn’t make it into the show.  But while Arthur Laurents’ book is a bit of a confused bore, the Rodgers-Sondheim score is really good. The musical is an adaptation of Laurents’ play The Time of the Cuckoo. The story: Spinster Leona Samish (Elizabeth Allen) travels to Venice and meets attractive Renato Di Rossi (Sergio Franchi), but she isn’t trusting enough to allow herself to fall in love with him. The show starts briskly with “Someone Woke Up,” Leona’s claim that she’s ready for anything. It continues well with “This Week, Americans,” in which the proprietor of the pensione at which Leona is staying (Carol Bruce) charms her guests. “What Do We Do? We Fly,” a sharply humorous group number about transatlantic air travel, follows. Rodgers gets in his bolt-of-lightning ballads with “Someone Like You” and “Take the Moment,” as well as the lovely title song — a waltz, natch. Also enjoyable is “Bargaining,” in which Renato teaches Leona the ins and outs of shopping in Venice. Only “We’re Gonna Be All Right” seems like filler, but there’s a reason for that; see below. — Peter Filichia 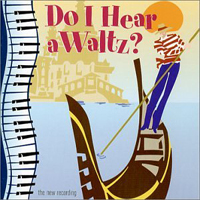 (4 / 5) On this recording, Steve Orich’s brisker musical direction helps make Do I Hear a Waltz? sound like a hit. Alyson Reed and Anthony Crivello have more personality than their Broadway counterparts, and what fun it is to hear Carol Lawrence on a cast album after too long an absence, playing the landlady of the pensione. Only Tina Gasparra, as her maid, disappoints as she tries much too hard to sound comic. There is one significant, unfortunate cut: “Bargaining” was a charming song, and an important one because it made us like Renato, so it’s a shame to lose it. On the other hand, there’s a nifty reprise of “This Week, Americans” and other additions and restorations. Most notably, the previously excised lyrics of “We’re Gonna Be All Right” make an incisive and sophisticated song out of what had just been a pleasant throwaway number. If these lyrics are an indication of what Sondheim was forced to eliminate at Rodgers’ insistence, we can begin to understand why the guy can’t stand this show.  — P.F.