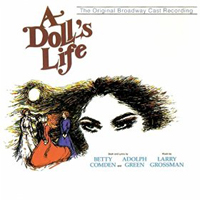 (3 / 5) A Doll’s Life is about what happened to Henrik Ibsen’s Nora after she slammed the door at the end of A Doll’s House. Betty Comden and Adolph Green wrote the book and lyrics, Larry Grossman wrote the music, and Harold Prince directed. The show opened on Broadway to terrible reviews and closed after five performances — but, fortunately, it was recorded. There’s a lot that’s wrong with the score, but also a lot that’s very right with it, as the cast album reveals. Most outstanding is Betsy Joslyn in the enormously taxing central role. Nora’s songs range from low belt through mid-range mix to high soprano. The character’s progression from frightened doll-wife through many bedrooms and boardrooms to successful business woman before she finally returns home to confront her husband is charted with dramatic and musical complexity, and Joslyn is more than up to the role’s challenges. She’s expressive in her heartfelt “Letter to the Children,” probing in “Learn to Be Lonely,” sensual in “No More Mornings,” triumphant in “Power,” and urgent in “Can You Hear Me Now?” These excellent solo pieces alone would make this recording worthwhile, but there are also fine performances by Peter Gallagher, particularly effective in “Stay With Me, Nora,” and George Hearn, who lends his authoritative baritone to “You Interest Me.” Most of the score has an operatic flavor — it even includes a mini-opera called “Loki and Baldur” — so it’s not surprising that all the supporting cast members have strong, legit voices. So, what’s wrong with A Doll’s Life? Well, a few numbers don’t work at all, and may even cause a groan or two. Of course, you can skip around at will on a recording, and this recording is definitely worth a try. — Jeffrey Dunn