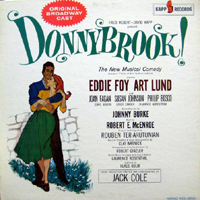 (4 / 5) This musical based on the movie The Quiet Man was a spirited but unsuccessful show. Donnybrook! did boast an excellent cast that included Susan Johnson, Eddie Foy Jr., and Art Lund, plus a wonderful score by Johnny Burke, who achieved fame by penning terrific lyrics to the music of Jimmy Van Heusen and others for dozens of Hollywood musicals. The songs are tuneful, funny, and romantic. “I Wouldn’t Bet One Penny,” “Ellen Roe,” “A Quiet Life,” “Dee-lightful Is the Word,” “The Loveable Irish,” “Sez I,” and “He Makes Me Feel I’m Lovely” may not be household titles, but they are excellent examples of Broadway songwriting at its best. Joan Fagan brings great spirit to several of the Burke ballads. Johnson, one of the theater’s top belters, also shows warmth and vulnerability here; she and Foy have a wonderfully charming comic rapport. And Lund sings with feeling, if not quite the requisite amount of theatricality. The album, which has not been officially transferred to CD as of this writing but is available through iTunes, sounds clear and immediate — but note that it was recorded in the heyday of the stereo-separation craze, so everyone sings left or right of center. Make an effort to find the recording and get acquainted with its many charms.  — Ken Bloom