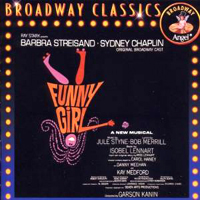 (5 / 5) It’s rare that we have concrete recorded proof of the exact moment when a performer became a legend, but that’s the case with the original Broadway cast album of Funny Girl. Yes, this recording of the Fanny Brice biomusical has that wonderful collection of Jule Styne-Bob Merrill songs; vivid performances by Sydney Chaplin as Nick Arnstein, Kay Medford as Fanny’s mother, Danny Meehan as her showbiz pal Eddie Ryan, and Jean Stapleton as a family friend; a killer overture, more than good enough to rival Gypsy’s; Ralph Burns’ opulent orchestrations; and Milton Rosenstock’s excellent musical direction/conducting. But what matters most is Barbra Streisand, who deservedly shot to super-stardom playing Brice. She’s never been fresher or more appealing than she is here in “I’m the Greatest Star,” “Cornet Man,” “Who Are You Now?”, “Don’t Rain on My Parade,” “The Music That Makes Me Dance,” and the definitive rendition of “People.” Streisand uses her sprawling belt, liberally doused with her natural tenacity and eccentricity, to make these songs sound like no one else should even think about singing them for fear of paling in comparison. Even so, her ambitious approach to the songs is always held in check by a complete commitment to character. More than 50 years after this cast album was made, Streisand’s  performance still represents the best of what Broadway can be, and propels the recording from “excellent” to “essential.” — Matthew Murray 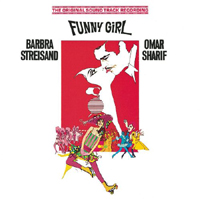 (3 / 5) It’s fascinating to compare Barbra Streisand’s performances on the original Broadway cast recording and the film soundtrack of Funny Girl. Though only about four years passed between the two recordings, the star’s approach to these songs changed drastically, no doubt partly because she was tailoring her renditions to the film medium, but also because Streisand’s performance style had already at that point started to become far more self-aware — some might say self-indulgent — than the thrilling, raw talent she had displayed on Broadway. The quality of her phenomenal voice itself is at its zenith on the soundtrack recordings of “I’m the Greatest Star,” “People,” “Don’t Rain on My Parade,” etc., and the comedy of such songs as “I’m the Greatest Star,” “His Love Makes Me Beautiful,” and “You are Woman, I am Man” is far funnier than on the OBC recording, thanks to better timing and more sharply honed comic chops. But listeners may find Streisand’s embellishments of some of the vocal lines to be a bit much here. One example of several: When she sings “Lovers are very special people,” swooping down the octave on the second syllables of both “lovers” and “people,” she sounds more like a grandstanding pop or jazz singer than a credible character in a musical. On top of all this, changes to the score have tilted the balance of the film and the album even more sharply toward Streisand: a new, mediocre title song and the not-especially funny comic number “The Swan,” both by Jule Styne and Bob Merrill, have been added, along with the Fanny Brice signature songs “I’d Rather Be Blue” and “My Man,” those latter two additions arguably damaging the integrity of the Styne/Merrill score. Meanwhile the cutting of such Broadway numbers as “Who Taught Her Everything,” “I Want to Be Seen With You,” and “Find Yourself a Man” have eliminated almost all solo singing from anyone else in the film; the two significant exceptions are “If a Girl Isn’t Pretty,” featuring Kay Medford as Fanny’s loving mother (with a delightful assist from Mae Questel as Mrs. Strakosh), and “You Are Woman, I Am Man,” in which Omar Sharif as Nicky Arnstein has a lovely if brief duet with Streisand. (For the record, three Styne/Merrill songs that the star sang in Funny Girl on Broadway, “Cornet Man,” “Who Are You Now?” and “The Music that Makes Me Dance,” have also been axed, so please turn to the OBC album to enjoy those.) On a positive note, the film soundtrack orchestrations are lovely and lush without being syrupy. Given the sales figures for this recording, it’s obvious that many people — including this reviewer — love it for what it is, but it’s probably best enjoyed as an album of “Barbra Streisand Sings Songs from Funny Girl” rather than a soundtrack album of a film musical.– Michael Portantiere 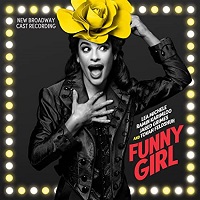 (4 / 5) Although Funny Girl was a hit on stage and film, it had a rough road returning to Broadway, the consensus being that Barbra Streisand’s performance in the central role of Fanny Brice had cast too large a shadow over the property. When the show finally came back in 2022, the headliner was Beanie Feldstein, primarily known for her work in television and film. Both the production and Feldstein’s performance were maligned by critics, many finding the physical production cheap and the star’s voice wanting for a score that demands excellence, and Feldstein departed soon after. Enter Lea Michele, whose performance was praised despite some controversy surrounding her reported bad behavior and lack of professionalism in previous projects, and Funny Girl’s fortunes immediately turned around, resulting in a mostly rewarding cast recording. On the downside: Although the orchestra was augmented for this album, it still sounds shallow, and Chris Walker’s orchestrations are more miss than hit. (The overture sounds especially anemic.) This production incorporated musical and textual changes from the show as originally written, with a revised book by Harvey Fierstein. Unfortunately, the changes are mostly for the worse, with (for example) the Follies song “His Love Makes Me Beautiful” rendered forced and unfunny, and the second act overlong. Ramin Karimloo is a suave Nick Arnstein, even if his modern-sounding tenor clashes somewhat with the classic style of Jule Styne’s score. The leading man has also been saddled with “Temporary Arrangement,” a song that was cut from the original production out of town and should never have been restored. On a brighter note, Karimloo does beautiful work when singing with Michele, as in a duet version of “Who Are You Now?” (previously a solo for Fanny). Tovah Feldshuh brings authentic New York Jewish grit to Mrs. Brice, and Jared Grimes is charismatic as Eddie, but it’s Michele who makes this album an essential listen with a true star turn. If listeners detect hints of Streisand in some of her vocal inflections, that’s to be expected, as many of  Streisand’s signature indulgences have become synonymous with the material. Michele attacks “I’m the Greatest Star” and “Cornet Man” with driven energy, then settles down and lures in the listener with “People” and the score’s other pensive ballads — just like Babs. And when Michele gets her determined grip on “Don’t Rain on My Parade,” you feel as if you’ve heard her wring every ounce of juice possible from one of the musical theater’s greatest Act I finales. It may have taken nearly 60 years, but Broadway audiences and cast album collectors finally have another quality Fanny Brice to enjoy. – Matt Koplik