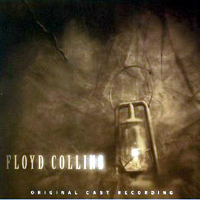 (5 / 5) In telling this bleak, based-in-truth story of a Kentucky man trapped in a cave and the media circus that surrounds him and his family during the ordeal, composer Adam Guettel  — the grandson of Richard Rodgers, and a poster boy for the new wave of American musical theater composers — married bluegrass and classical strains to create an utterly unique  sound that echoes with Appalachian authenticity. Some “old school” enthusiasts may not appreciate Guettel’s musical audacity, whether it’s the yodeling in “The Call” or the meandering gorgeousness of “Daybreak.” But the title folk ballad, the rollicking “Riddle Song,” and Floyd’s intensely moving spiritual vision “How Glory Goes” have won over even some of the most hardened purists. As for Guettel’s lyrics, they’re colloquial and character-perfect. (Additional lyrics were contributed by Tina Landau, the author of the show’s book.) This excellent recording preserves the performances of an outstanding cast including Christopher Innvar in the title role, the clarion-voiced Jason Danieley as his brother Homer, and the incomparable Theresa McCarthy as their touched-in-the-head sister. Bruce Coughlin contributes excellent orchestrations that make use of acoustic guitar, banjo, and harmonica in concert with more traditional musical theater instrumentation. — Brooke Pierce