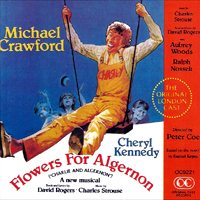 (1 / 5) The musical Flowers for Algernon — or, as it was actually titled onstage, Charlie and Algernon — is based on the Daniel Keyes novel about a mentally retarded man, a mouse, and an experimental intelligence-increasing procedure that they undergo together. Charles Strouse’s score contains one terrific song (the title number, a song-and-dance duet), another that could be described as pretty (“Whatever Time There Is”), and two that might be called interesting (“The Maze” and “Charlie”). But on the whole, it’s rather boring and occasionally unpleasant. No better are the lyrics, by David Rogers, who also wrote the libretto. As Charlie, Michael Crawford is utterly annoying for the first half of the disc; once the character achieves a higher level of intelligence, Crawford mercifully lightens up on the squeak factor in his voice. A few of the songs are almost saved by Cheryl Kennedy’s singing (her role is that of Charlie’s doctor/love interest) and/or Philip J. Lang’s orchestrations, but only almost, and the album’s sound quality is weak. The London production was no hit, and a later Broadway version with P.J. Benjamin and Sandy Faison was even less successful. — Seth Christenfeld