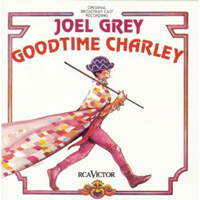 (3 / 5) As he did with Ben Franklin in Paris, librettist Sidney Michaels — this time leaving the lyrics to other, more expert hands — tried to give old European history new Broadway pizzazz in this somewhat cumbersome retelling of Charles VII’s relationship with Joan of Arc. If that sounds to you like a topic that doesn’t naturally sing, you’re right; there are abrupt shifts of tone between heavy, Old World seriousness and musical-comedy silliness. And, oddly for a big Broadway score, nearly all of Larry Grossman and Hal Hackady’s songs are given to Charles (Joel Grey) or Joan (Ann Reinking), leaving little for the chorus or for the large, interesting supporting cast (Susan Browning, Richard B. Shull, Grace Keagy, Louis Zorich, Jay Garner, and others) to do. Still, Grossman and Hackady offer an enterprising attempt at a traditional Broadway-style score of wit and substance. There are no inappropriate rock posturings here, but there are some quite wonderful lyrics in such numbers as “Why Can’t We All Be Nice?” and “Voices and Visions.” Speaking of voices, Reinking’s has an unpleasant, pseudo-Gwen Verdon rasp. And Grey — outfitted with all the accoutrements of a big-musical leading role, including a heavy breathing 11-o’clock number — tends to over-emote. But this is a score of which connoisseurs of musical theater are understandably fond, and the recording is a lively, tuneful history lesson bolstered by Jonathan Tunick’s excellent orchestrations. — Marc Miller