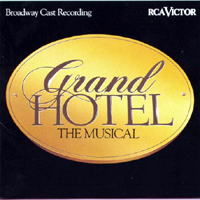 (4 / 5) Based on the Vicki Baum novel that inspired the classic MGM film, Grand Hotel traveled a crooked road to Broadway. The first pass at the material, by librettist Luther Davis and songwriters Robert Wright and George Forrest, was titled At the Grand. It closed out of town in 1958. Decades later, the project was resurrected by director-choreographer Tommy Tune. When trouble set in on the road, Tune brought in Peter Stone to rewrite the book and Maury Yeston to write seven new numbers and revise existing ones — with no credit and little credit, respectively. Even with mixed reviews, Grand Hotel ran over a thousand performances. It was widely felt that Tune’s brilliant staging had triumphed over weak material. But, as this disc shows, the score is no cut-and-paste job; every song meshes perfectly in this drama of life, death, and reversals of fortune in a Weimar Berlin hotel. In fact, it’s hard to tell who composed which songs without referring to the notes, especially since it’s not indicated which of the Wright/Forrest songs were revised by Yeston. Peter Matz’s orchestrations merge sinister, Kurt Weillesque downbeats with tinselly tea-dance rhythms and soaring melodies to create a brooding score that perfectly mirrors the fatalistic narrative. There are some routine items here, but the best songs are thrilling, including the romantic “Love Can’t Happen,” the sizzling jazz duet “Maybe My Baby Loves Me,” and “I Want to Go to Hollywood,” a bouncy number with dark undertones. (The first- and third-named of these are by Yeston, the second by Wright/Forrest). Recorded late in the show’s run, the disc features most of the original cast, including Liliane Montevecchi as an aging ballerina, Karen Akers as her devoted companion, Jane Krakowski as a sexy stenographer, and Michael Jeter as a dying bookkeeper. Sadly, David Carroll, who played Montevecchi’s doomed lover, died of AIDS before he could record his performance; his songs are covered by his capable replacement, Brent Barrett, and a bonus track features a live recording of Carroll singing “Love Can’t Happen” in a cabaret revue. Overall, Grand Hotel is a potent musical soap opera.  — David Barbour