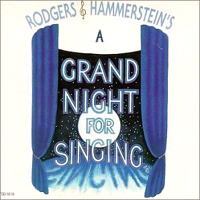 (2 / 5) This revue of songs from Rodgers and Hammerstein musicals was directed by Walter Bobbie, with musical direction by Fred Wells. It opened at the now-defunct, high-class cabaret venue Rainbow & Stars at Rockefeller Center in 1993; then, later that year, the show had a brief run on Broadway in a Roundabout Theatre production. It’s an amiable compilation of beloved standards such as “Hello, Young Lovers,” “If I Loved You,” “Some Enchanted Evening,” “Oh, What a Beautiful Mornin’,” and “It Might as Well Be Spring,” along with several of the team’s songs that are not as famous but well worth hearing, including as “So Far” and “Don’t Marry Me.” Some of the songs are performed in full, while others are excerpted in medleys. The show received Tony Award nominations for Best Musical and, believe it or not, Best Book of a Musical. This recording features the Broadway company — Victoria Clark, Jason Graae, Alyson Reed, Lynne Wintersteller — plus Gregg Edelman filling in for Martin Vidnovic. The songs of Rodgers and Hammerstein, like those of Stephen Sondheim, tend not to work very well in a revue format because they were so skillfully tailored to specific characters and situations. Two that suffer greatly when taken out of context are the comedic “I Cain’t Say No” from Oklahoma! and “Honey Bun” from South Pacific. Others stand better on their own, for example, the ballads “Do I Love You Because You’re Beautiful?” (from Cinderella) and “This Nearly Was Mine” (from South Pacific). This recording can’t hold a candle to any cast album of a full Rodgers and Hammerstein musical, but it can be enjoyed as a sampler of the legendary team’s work. — Michael Portantiere