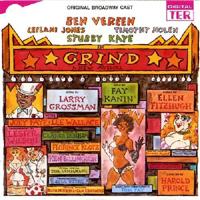 (3 / 5) Grind, which opened during director Harold Prince’s 1980s slump, was one of the most hated shows of the period. It’s easy to understand why: Fay Kanin’s overloaded book (based on her own unproduced screenplay This Must Be the Place) deals with racism, the Depression, feminism,  riots, murder, suicide, and Irish Republicanism, while the score (music by Larry Grossman, lyrics by Ellen Fitzhugh) rides one’s nerves with its harsh truths and dissonant chords. Nevertheless, this is the decade’s most fascinating misfire. It’s set in a Chicago burlesque house in 1933 where, thanks to payoffs, both black and white performers appear. Much of the action centers on the triangle between LeRoy, an Uncle Tom-like comedian (Ben Vereen); Satin, a tough-minded stripper (Leilani Jones, in a Tony-winning performance); and Doyle (Timothy Nolen), a drunken bum with a brogue and a terrible secret. Stubby Kaye as Gus, a comedian who’s losing his sight, acts as the plot’s catalyst. For many, the score is too shrill and confrontational — Bill Byers’ orchestrations are nerve-jangling — but the best stuff grabs you by the throat. Jones sizzles in the angry strip number “A Sweet Thing Like Me,” commands in “All Things to One Man,” and (with help from Vereen) wrings every bit of humor out of “Why, Mama, Why,” in which she imagines confronting her bitter mother. Nolen’s opera-level voice makes the most of “Katie, My Love” and “Down,” in which Doyle recalls his sad family history. An ensemble number, “The Grind,” acridly describes daily life in burlesque. And there’s a knockout gospel tune, “These Eyes of Mine,” led by Carol Woods. This is a recording that absolutely deserves your attention.  — David Barbour