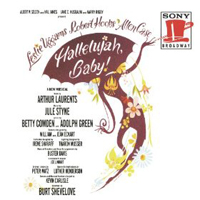 (2 / 5) Here’s the gimmick: The show, with a book by Arthur Laurents, takes us from a Southern plantation in 1900 to New York in the ’60s, yet the four main characters never age. Three of them are black, and the entire story is an allegory of the changing roles of blacks in American society. Sounds clever but, in 1967, Hallelujah, Baby! pleased nobody. What was intended as progressive came off as patronizing. (Walter Kerr’s tart assessment in The New York Times: “A course in Civics One when everyone in the world has already got to Civics Six.”) Yet Leslie Uggams scored a personal triumph, and the score — music by Jule Styne, lyrics by Betty Comden and Adolph Green — is filled with distinctive songs. Uggams’ first number, “My Own Morning,” with its assertive lyrics and oddly loping melody, gets things off to a fine start. Later, she has the raucous, self-aware “I Wanted to Change Him” and the unsentimental, oddly minor-keyed “Being Good.” Then there’s the melancholy trio “Talking to Myself’ and the kicky title tune. Not everything is at this level; the first act sometimes seems to be marking time with numbers pointing out the silliness of racism. And one tune, “Witches Brew,” is a shamelessly recycled version of “Call Me Savage” from Fade Out-Fade In. Still, Uggams is divine throughout, the rest of the cast is strong, and at least in terms of the score, the good far outweighs the bad.  — David Barbour