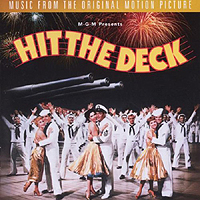 (3 / 5) Hubert Osborne’s Shore Leave, a dull sailors-in-port comedy from 1924, was incessantly reincarnated: as a silent movie, a Broadway musical that was filmed twice, and another movie musical with a different score. The 1936 film was the Astaire-Rogers gem Follow the Fleet, for which Irving Berlin wrote great songs; but Vincent Youmans’ stage show Hit the Deck! came first (1927). With songs like “Hallelujah!” and “Sometimes I’m Happy” (lyrics by Clifford Grey and Leo Robin), this show doesn’t deserve complete extinction, but in the realm of sailor musicals, it ain’t On the Town. MGM’s 1955 film version is plodding — yet the Youmans score, with others of his standards tossed in, sounds fine here as performed by a large cast full of musical pros. Perhaps it was because of CinemaScope that the script was padded with three couples, all of whom get a crack at the songs:  they are played by Jane Powell and Vic Damone, Tony Martin and Ann Miller, Debbie Reynolds and Russ Tamblyn (dubbed by Rex Dennis). Also on hand is the enormous-voiced Kay Armen. Damone and Martin were singers, not actors, so there is more vocal tone than theater in their performances — though it’s certainly gorgeous tone. But there sure is plenty of theatricality in Ann Miller’s “Lady From the Bayou.” Miller also has fun with “Keepin’ Myself for You,” written by Youmans for the first (1930) film version of Hit the Deck! Powell and Reynolds are no slouches either, and the ear-popping early stereo soundtrack is given a fine TCM presentation on CD.  — Richard Barrios