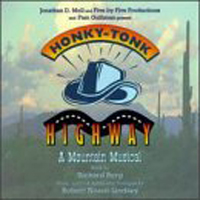 (2 / 5) How much mediocre country music can you take if it’s terrifically well performed? That’s the barometer of how much you’ll enjoy this recording. Robert Nassif-Lindsey (a.k.a, Robert Lindsey Nassif and other variations on his name) wrote a series of old-style country-western songsfor this “mountain musical.” Richard Berg is credited as librettist, with Nassif-Lindsey listed as having provided “additional dialogue,” but the album gives no hint of a plot. As for the songs themselves: “Follow Where the Music Goes” is reasonably catchy; “Baby, I Love Your Biscuits” is sort of fun; and “Easier to Sing Than Say” is kind of pretty. The cast of actors-singers-musicians includes a few stage notables in Sean McCourt, Erin Hill, and Matthew Bennett, alongside Rick Leon, Kevin Fox, and musical director-arranger-performer Steve Steiner. Rich Blacker and Andy Taylor are heard in a few tracks as extra instrumentalists, with Nassif-Lindsey occasionally popping up on piano a few times. The score of Honky-Tonk Highway sounds very different from the composer-lyricist’s work on two other musicals, 3hree and Opal, so this recording is certainly a testament to his range. — Seth Christenfeld