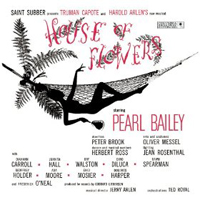 (5 / 5) The cast album of Harold Arlen and Truman Capote’s flop musical set in a West Indian bordello is stunning and unique; the steel drums and whistles of the overture announce a 1950s musical with a sound like no other. The opening number, for the girls of the house, promises an unusual frankness for the era, and Capote’s lyrics (“Drowsin’, dreamin,’ moonbeamin’ / ’bout the thing we’re supreme in”) are amazing for a beginner. Pearl Bailey, owning the show as Madame Fleur, throws her weight around in “One Man Ain’t Quite Enough” and caps the number with an outrageous ad lib that passed instantly into cast-album legend. A teenage Diahann Carroll, nursing a cold for the recording session, nonetheless oozes charm and unselfconscious allure in “A Sleepin’ Bee.” And that’s just the first 15 minutes! (More oddball cast album history is made later, when Carroll’s voice gives out near the end of “I Never Has Seen Snow” and Arlen has to dub a high note for her.) It’s a spellbinding score with quirky orchestrations by Ted Royal, thrillingly conducted by Jerry Arlen. For the 2003 CD reissue of this treasured recording, Columbia/Sony remastered everything and made the audio crisper; put the songs in their stage order; found a longer, more sumptuous take of “Mardi Gras”; let the tape run a few seconds longer on “Wait’in'”; and inserted a “Mardi Gras Waltz” from a Percy Faith album. There are other bonus tracks — a single of “Two Ladies in de Shade of de Banana Tree” by cast member Enid Mosier, a tape of Arlen’s first draft of “A Sleepin’ Bee,” and Capote reading an excerpt from his source-material short story — plus a booklet that contains some photos from the gorgeous original production. The cumulative effect is compelling. For a half-century, people have heard this amazing score and wondered why such a show failed. We’re lucky, at least, that House of Flowers yielded one of the great cast albums. — Marc Miller 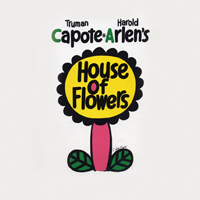 (1 / 5) Original producer Saint Subber unwisely ordered a major rewrite of House of Flowers for a new, scaled-down Off-Broadway production that yielded this cast album in shrill stereo. Here, the islanders appear more willfully ignorant than disarmingly unworldly. Some great songs (“One Man Ain’t Quite Enough,” “Genna Leave Off Wearin’ My Shoes”) are missing, some lackluster new ones (not entirely by Harold Arlen and Truman Capote) are inserted, and the modest calypso-band arrangements sound like toy whistles next to Ted Royal’s great originals. The musical director, Joe Raposo, plays it so safe that it sounds like he’s warming up for Sesame Street. It’s not the cast’s fault: Yolande Bavan is a charming Ottilie, Thelma Oliver and Hope Clarke are lusty sidekicks, and Novella Nelson gamely grunts out something called “Madame Tango’s Particular Tango.” Replacing Pearl Bailey as Madame Fleur, Josephine Premice is deprived of some of the character’s best material; “Don’t Like Goodbyes,’ which was evidently written for Ottilie and swiped by Bailey, is here restored to its rightful owner. Premice’s unidentifiable accent and inimitable, scratchy singing are ingratiating, but the squirm-inducing moments in this wilted Flowers far outweigh the soul-satisfying ones. If there’s an object lesson in how to ruin a classic score, here it is. — M.M.