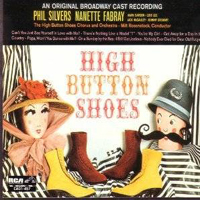 (3 / 5) The 24-minute cast album of High Button Shoes contains only eight of the score’s 14 songs; that’s all that could fit on both sides of four 78-rpm records. Two of the show’s numbers became very popular: the soft-shoe “I Still Get Jealous” and the polka “Papa, Won’t You Dance With Me,” both duets for Nanette Fabray and the now-forgotten Jack McCauley. But these songs have pretty much faded from memory. They and the score as a whole, with music by Jule Styne (his first Broadway hit) and lyrics by Sammy Cahn (his only Broadway hit), are as old-fashioned as the show’s title. The secondary lovers get two very arch love ballads, and McCauley sings lead in a nice, swirling waltz. The other three songs feature Phil Silvers. He plays (what else?) a lovable con man who’s fixing a football game in “Nobody Died for Dear Old Rutgers,” giving a family a new car (because he traded them out of their valuable land) in “There’s Nothing Like a Model T,” and extolling the charms of the beach (because he’s managed to escape the law) in “On a Sunday by the Sea.” That beach is the setting for the still-talked-about, much-praised “Mack Sennett Ballet” choreographed by Jerome Robbins. Alas, the music for it is not on this disc, but that’s what the cast album of Jerome Robbins’ Broadway is for. (Note: RCA’s CD transfer of High Button Shoes was only briefly available and is long out of print, but all of the tracks from the album are now available on a single Sepia CD, paired with the original cast recording of Seventeen.) — Peter Filichia