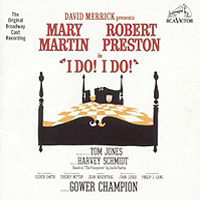 (5 / 5)  A two-character musical based on the play The Fourposter by Jan de Hartog, about a long-married couple, I Do! I Do! holds a mirror up to the audience, allowing us to revel in the universality of our experiences and to feel the enjoyable shock of recognition. Of course, it doesn’t hurt to have Mary Martin and Robert Preston as your leads. This energetic, highly theatrical recording is a knockout; you’d think that listeners would grow tired of a two-person musical, but Tom Jones and Harvey Schmidt have lots of surprises up their sleeves. Schmidt varies his rhythms and melodies wonderfully, while Jones offers some rich, poetic lyrics and some remarkably funny ones, such as “A Well Known Fact” and “Nobody’s Perfect.” The requisite romantic songs include the hit “My Cup Runneth Over.” Among the other highlights of the score are “Where are the Snows of Yesteryear?” and “Someone Needs Me.” — Ken Bloom 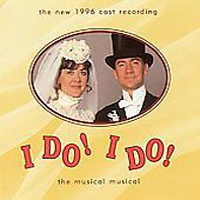 (2 / 5) This recording features Broadway stalwarts Karen Ziemba and David Garrison as the long-wed Agnes and Michael. Both sing and act the songs very well, but many listeners will prefer the performances of musical theater icons Martin and Preston, and will feel the piano reduction of the score renders this cast album non-competitive with the original recording. Of course, the songs themselves remain as wonderful as ever. — K.B.