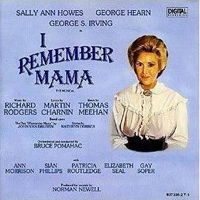 (3 / 5) Richard Rodgers’ musical imagination persisted throughout his life, despite depression, a heart attack, and cancer of the vocal cords. His final show opened just seven months before he died. It was a musical version of I Remember Mama, a play written by John Van Druten and adapted from Mama’s Bank Account, a collection of stories by Kathryn Forbes. The play had also inspired a movie and a television series.) In all its incarnations, the story is about a Norwegian family living in San Francisco around 1910. But, foremost, it’s about Mama, a woman of little education who has a naturally liberal turn of mind. Rodgers wrote the musical with librettist Thomas Meehan and lyricist-director Martin Charnin. Film actress Liv Ullmann, who was not a gifted singer, played the title role. During the out-of-town tryout, producers Alexander Cohen and Hildy Parks brought in a new director, Cy Feuer, and a new lyricist, Raymond Jessel. Amid the chaos of the pre-Broadway tour, Rodgers created six new songs in two weeks. The show opened on Broadway in May 1979 to largely disparaging reviews and closed three months later. Still, Mama proves that even a lower-tier work by Rodgers is superior to almost anyone else’s best effort, and in songs such as “You Could Not Please Me More” and “Time,” the music soars above the pedestrian lyrics. No cast album of the show was made; this studio recording was produced by Norman Newell, with John Yap as executive producer and Theodore S. Chapin as coordinating producer. Parts of it were recorded on either side of the Atlantic to accommodate a dream cast of American and British performers. George Hearn as Papa and George S. Irving as Uncle Chris recreate their Broadway roles; Sally Ann Howes replaces Ullmann as Mama; Ann Morrison plays Katrin, the writer who immortalizes Mama in magazine fiction; Gay Soper is Mama’s benevolent sister; Patricia Routledge is Aunt Jenny; Elizabeth Seal is Aunt Sigrid; and Sian Phillips appears as a British novelist. In the lively “Easy Come, Easy Go” and the acidic “It’s Going to Be Good to Be Gone,” Irving shows off the stuff that made him one of the theater’s great comedic assets. The recording’s high point is the Routledge-Seal duet “A Most Disagreeable Man.” — Charles Wright